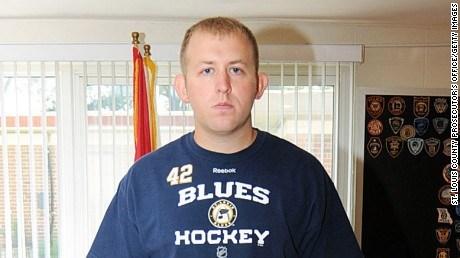 (CNN) -- Darren Wilson may have been legally vindicated in killing Michael Brown, but in many ways, he doesn't live like a free man.

Few people know where he lives with his wife and baby daughter. The 29-year-old former Ferguson police officer hasn't been able to land a new police job, and is haunted by death threats stemming from Brown's shooting almost exactly one year ago.

Those are among the latest revelations about Wilson's life as detailed in a profile by The New Yorker. Here are the six things we learned about Wilson:

His mother was a habitual criminal

Wilson was raised in Texas by a mother who was a compulsive thief, according to the New Yorker profile.

As a teenager, Wilson distrusted his mother so much that he had two bank accounts -- one that had little money in it, so his mother couldn't steal from him, and a secret account where he stashed earnings from his summer jobs.

He said he even warned a friend's parents to not let her into their house because she'd likely find a way to steal their identities and use their credit cards.

\"She never wanted to hurt us,\" Wilson said. \"But when it came to money she was going to get it, one way or another.\"

But his mother managed to avoid prison. She died suddenly when Wilson was a teen, under circumstances that weren't clear to him at the time.

Wilson now believes she may have committed suicide.

He said he 'didn't want to work in a white area'

After his mother's death, Wilson worked in construction before deciding to become a police officer. He said he wanted to work in the \"North County\" area of St. Louis County, Missouri, which had more black residents as well as higher crime rates.

He said the thought working in the area could boost his career.

\"If you go there and you do three to five years, get your experience, you can kind of write your own ticket,\" Wilson told The New Yorker's Jake Halpern.

He landed a job in the town of Jennings, which was 90% black and largely impoverished. But he struggled to interact well with the community and sought the help of field training officer Mike McCarthy -- a white officer who had gained street credibility with many of the town's black residents.

\"Mike, I don't know what I'm doing,\" he recalled telling McCarthy. \"This is a culture shock. Would you help me? Because you obviously have that connection, and you can relate to them. You may be white, but they still respect you. So why can they respect you and not me?\"

McCarthy gave Wilson a slew of pointers, telling him to loosen up, joke with residents and never condescend.

\"Darren was probably the best officer that I've ever trained -- just by his willingness to learn,\" McCarthy told the magazine.

Eventually, Wilson was laid off from the Jennings police department and had to find a job elsewhere.

Wilson joined the ranks of the Ferguson Police Department, which the Department of Justice later chastised for claims of institutionalized racism and a disproportionate targeting of blacks.

Wilson had some questionable behavior on the force, but not just with black residents, the New Yorker profile said.

In one incident, Wilson threatened a white man who was about to get a court summons. A video shows Wilson walking up to the man's house and noticing that he is being filmed.

\"If you want to take a picture of me one more time, I'm going to lock your ass up,\" Wilson said in the video, according to the magazine.

The magazine cited another instance in which Wilson arrested a black man for \"failure to comply\" -- though the man didn't appear to be breaking any laws.

She said such reports illustrated \"a familiar picture of contemporary law enforcement\" but added that officers aren't solely to blame because they're often trying to \"enforce vague standards for detaining people that they don't really understand.\"

He won't read the DOJ report on Ferguson

In March, the Department of Justice released two significant reports: one that said \"Wilson's actions do not constitute prosecutable violations\" of federal civil rights law, and one that said Ferguson police and municipal court engaged in a \"pattern and practice\" of discrimination against African-Americans.

\"I don't have any desire,\" he said. \"I'm not going to keep living in the past about what Ferguson did. It's out of my control.\"

He also questioned the veracity of the DOJ's report, calling the numbers \"skewed.\"

\"You can make those numbers fit whatever agenda you want,\" he said.

He hasn't been able to get another police job

After a grand jury declined to indict him, he wanted to get back on the streets of Ferguson. But he was told he'd be a liability, Wilson told the magazine.

He worked for two weeks at a boot store, stocking inventory, but quit when reporters started calling the store.

Wilson said he's still able to go to restaurants with his wife and have some semblance of a normal life -- he just has to do so carefully.

He is circumspect about Brown

Wilson didn't talk much about Brown, the unarmed African-American teen he shot dead on August 9. But Brown is very much a presence in Wilson's life.

\"You do realize that his parents are suing me?\" Wilson told the magazine. \"So I have to think about him.\"

When the writer asked him if he thought Brown was a \"bad guy\" or someone who got himself in a \"bad situation,\" Wilson said, \"I only knew him for those 45 seconds in which he was trying to kill me. So I don't know.\"

\"Do I think about who he was as a person? Not really, because it doesn't matter at this point,\" Wilson said. \"Do I think he had the best upbringing? No. Not at all.\"

\"In one sense, they want to be angry about the things he's basically saying about their son. On the other hand, they're not surprised,\" Gray said.

\"I find it really appalling that he would make that reference when he had a terrible upbringing himself, by his own admission.\"