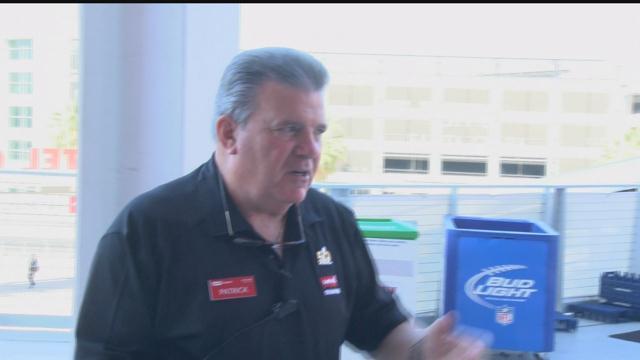 Two teams battling it out for the Lombardi trophy, a name synonymous with Packers football and winning.

So why was the league's biggest prize named after him?

In the late 1950's, the Green Bay Packers had all the right tools including five future Hall of Famers, but they were using them all the wrong ways.

A one-ten and one record in 1958, the worst in team history was proof of that.

In the offseason, Head Coach Ray "Scooter" Mclean resigned and the Packers began their search for his replacement.

At the top of their list was Vince Lombardi.  He was an assistant coach for the New York Giants.

Lombardi was hired as the Packers' Head Coach and General Manager on January 28, 1959.

And the turn-around in Green Bay was immediate.

In his first season, the Packers went seven and five.

By season three, they were NFL champs.  A feat they would repeat four more times

Hoisting the trophy that would eventually take Lombardi's name.

Under Lombardi, the Packers would not see one, single losing season.

And though his time has long since gone,

The way his inspired and the way he won, both on and off the football field,

Continues to make him one of the most recognizable figures in sports.

We showed you earlier in the special our behind the scenes tour of Levi's stadium well it turns out that our tour guide pat had a run-in with the Packers legend when he was a kid.

“I'm catching punts for Bobby Jo Green. Here comes Vince, out of the locker room with his gold jacket on, 50,000 people. I thought the pope showed up. 50,000 people just arose and started clapping. Now I'm catching balls and here comes Vince and he's coming right towards me. The balls bouncing off my forehead, bouncing off my nose, they're yelling at me pat catch the ball! Catch the ball,” said Pat Marcuccillo.