For $8 Million This Nevada Town Can Be Yours 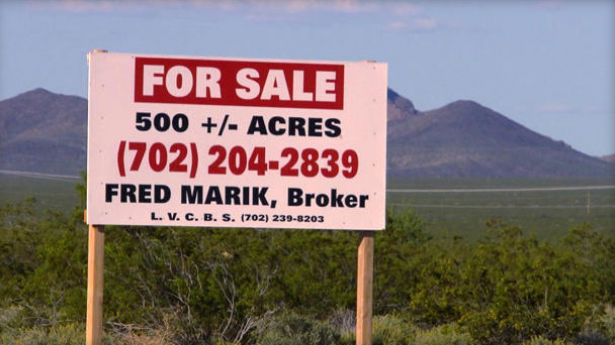 Do we have a deal for you: a real estate listing in Southern Nevada offering an ENTIRE TOWN for sale. After 50 years, the owner is ready to retire. Correspondent Mark Albert has more.

If Las Vegas is famous for that one flashy street, Nancy Kidwell is known for her town's much less gaudy main street. Eighty miles south of Las Vegas is Prairie Valley Drive, a strip of dirt that appears out of the searing desert heat like a mirage.

For Kidwell, it's her Shangra-La.

"You can look at the mountains on either side and not see a high-rise everywhere," she told Albert.

Kidwell recently gave Albert a tour of Cal-Nev-Ari, Nevada, on a day that hit 99 degrees. She and her first husband, Slim, named the town for the three states that intersect nearby.

About 375 people live in the town that sports a 10-unit hotel with, a general store, a laundromat and community center. There is even a fire station.

But there are no paved roads, no schools.

Among the residents is 12-year-old Trace Madsen, who was riding his ATV is front of the town's casino. He boasted about Cal-Nev-Ari's winning hand: "It may look bland and boring, but it's pretty cool."

Nancy and Slim Kidwell got started by selling airplanes and running a flight school in Southern California in the Sixties. That's how they met Elvis Presley, who shot the movie "Paradise, Hawaiian Style" in their office at Torrance Airport in 1966.

But Kidwell, a lifelong aviator, says she wasn't star-struck: "I never asked him for his autograph; he was afraid to fly!"

A few months later, Kidwell would conquer Vegas before the King did. The couple applied for, and got, 640 acres and a World War II dirt airstrip from the federal government at no charge.

The only residents here were the tumbleweeds. No water, no power.

But Kidwell and her husband brought with them plenty of energy: "The driller said, 'Where do you want water, Slim?' And he just paced off and put an X with his heel and said, 'Right there, Joe!'"

Albert asked, "Wouldn't it have just been easier to buy a house somewhere in Las Vegas?"

Kidwell does everything in Cal-Nev-Ari, from ordering the beef patties for the café, to opening up the post office, and hiring the bartenders for the 24-hour saloon.

For 51 years, Kidwell has ruled the roost here. Come to think of it, even the roosters don't get up as early as she does: 4:45 a.m., for her first chore of the day: "Go up and check the water tank every day, make sure it's full, before I come to the casino."

"Don't you have people for that?"

"I wouldn't trust them. I have to see it for myself because I know the system," she said.

But at 78 years old, and with no children or surviving spouse, Kidwell is grudgingly admitting time has the upper hand. The 520-acre parcel -- the complete town - is up for sale. Asking price: $8 million.

"I'm selling it because I'm not getting any younger," Kidwell said. "I haven't found the fountain of youth, and there's no one to take my place, so I have to start providing for the future of the community."

Fred Marik, who is handling the sale, said more than three-quarters of the town is undeveloped -- a real jackpot in a state where the feds own 80 percent of the land. And so far there are three interested buyers.

At the saloon, Albert asked some locals if any had tried to convince Kidwell not to sell.

"It's a scary concept for her to sell, because we don't know what's in store for us," said Deborah Aguilera.

But Kidwell says when she does sell, she intends to stay put. "I've lived here. Where would I go?"

Kidwell will keep her home here with her dog, Max, and a parrot, Rambo: "He's a heck of a watchbird. He knows more than the dog does."

She'll also keep a few square feet a few feet under, right between her two husbands, in the town cemetery. Each headstone has a plane, clouds, and two words: "Gone West." In fact she already has her headstone, except for the final date.

"You are a planner, aren't you?" Albert said.

"Well, I have to be. No one else is going to think of something like that."

One of the details in the town's sale is that the cemetery -- and Nancy Kidwell -- must remain. "When your roots are somewhere, that's where you want to be," she said.

This town may be just a strip of land a long ways from that other strip, but Kidwell is not about to take off -- no matter the price. It's just not in the cards.