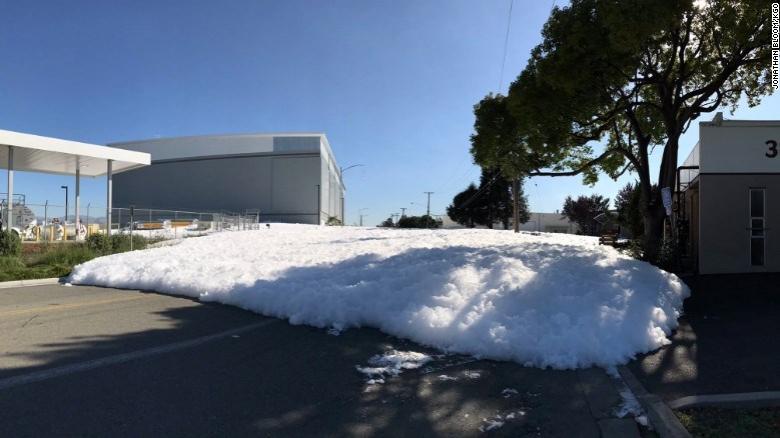 (CNN) In a scene reminiscent of a laundry-gone-wrong episode of a classic TV sitcom, a giant -- really, really giant -- blob of foam filled a 60-foot-high airport hangar before spilling into nearby streets at San Jose International Airport in Santa Clara, California.

Thousands of gallons of fire retardant were emitted Friday in a malfunction of a fire suppression system at the private hangar, officials said.

The retardant went on its bubbly rampage at about 11:00 AM local time said Patrick Sniffen, vice president of marketing for Signature Flight Support, which operates the building.

The foam-filled facility is on the opposite side of the airport from the terminals, airport spokeswoman Rosemary Barnes said, "so there is no impact to flight operations."

"It looked like snow, but as you got closer, it looked like a bubble bath gone terribly wrong," witness Sabrina Lochner told CNN. She posed for a photo in front of the blob, which, even at its edge, was several feet high.

Wind also kicked up chunks of foam and blew it like snow.

Although the flame-retardant foam meets environmental regulations, it is considered a hazard, said Matlow.

Most of what the foam came into contact with was pavement, which cleanup crews are expected to power wash, he said.

Crews blocked off storm drains to prevent the foam from spilling into nearby creeks, Matlow said. They will also collect the water they use to dilute the foam and rinse the streets so it won't contaminate anything else.

In the meantime, fire officials are warning people to avoid touching the foam, as it could cause irritation.

The warning didn't reach all passersby in time.

"When I first got here this afternoon there were people playing in the foam, I told them to get out of it and go shower," said Matlow.