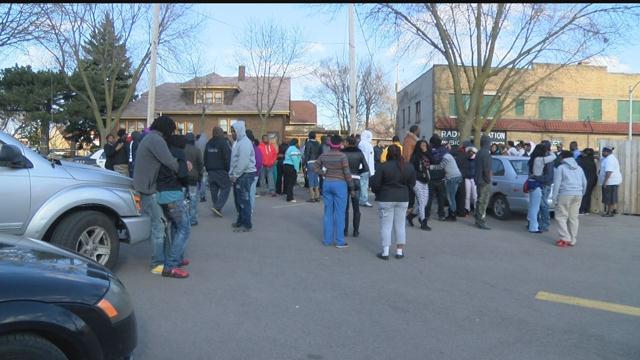 Since Thursday, five Milwaukee teenagers have been shot; two of them died, including a 17-year-old on the north side Monday.

Milwaukee Police Chief Ed Flynn calling for change after a weekend of violent crime where the victims and offenders were teens.

His family says 17 year old Kemone Love was shot in the face and left die on the north side of Milwaukee and while police search for answers its highlighting a bigger problem: Too many teens are dying on the streets of Milwaukee.

Prayers were lifted up, tears fell and fists flew.

A pastor told us, "As I was praying I was hearing them talk about retaliation already."

It was a chaotic scene as people gathered  at 19th & Atkinson Monday afternoon after police say a 17-year-old man shot near Capitol and Green Bay was driven by the people he was with to this home where he died.

His older brother tells us the young man had been shot in the head and chest.

"That's all I had. That's my younger brother. I just feel like I lost everything," he said.

Police don't know why the shooting happened or why he was dropped off but one neighbor, who didn't want to go on camera says, it shook her to the core.

"As I got in the house it was a dead body in the driveway.In. My. Driveway. At that time I would have had my kids in the car coming home and they would have saw," she told CBS 58.

This comes just one day after the death of another teenager. Sixteen year old Shamaury Young was killed when trying to hold up a game of dice on Sunday.

"He was wearing an ankle bracelet, he was 16 years old. He was arrested in 2014 & 2015 for armed robbery and in 2016 he's dead at an armed robbery while apparently being monitored. I would say that indicates we have a system where we have a problem," said Chief Flynn.

Flynn says not enough is being done to target these young offenders and while he believes the city is doing its part he says the state is not.

"Our challenge is right now, you've got an overcrowded Lincoln Hills that's badly managed and its not doing its job, and you've got probation but no one's really paying attention," said Flynn.

And then we wonder why young offenders don't learn a lesson from their arrest.

"I'm afraid. Its tragic in the young lives being lost. Its just so very sad. I'm thinking when I look at the young man's body that would have been my child or my brother. And it just hurts," said the neighbor.