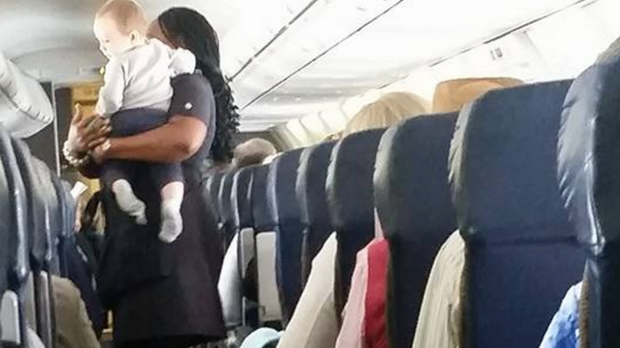 (CBS NEWS) As Heather Gooch boarded a plane with her 9-month-old son, she felt what nearly every mom feels during their baby's first flight: stressed.

Shortly after her flight took off, she felt like a weight had been lifted -- thanks to a special flight attendant.

When Southwest Airlines flight attendant Anissa noticed the little boy getting antsy, she offered to hold him.

"About 45 minutes into the flight, Aiden didn't want any part of sitting with us," Gooch told CBS News, adding her husband was sitting next to her. "He couldn't sit still. Anissa happened to be walking by, and Aiden got so excited to see her. She looked and me and asked me if I minded if she held him."

Thanking the woman, Gooch happily handed her son over.

Aiden smiled and waved at passengers as Anissa walked him up and down the aisle.

"It wasn't any longer than 10 minutes, but just to see how good she was with him and how happy he was waving to everyone really was amazing for us," Gooch said.

A day after Gooch returned home from Fort Lauderdale, Florida, to Levittown, New York, she posted on Southwest's Facebook page to thank the worker for her kindness.

"Although this may not be a story that stands out from the rest, I wanted to thank her and let her know how appreciated she is," Gooch wrote. "We so often hear about the negative things going on so I wanted to share this story of a someone who made my trip a little brighter."

With nearly 14,000 flight attendants worldwide, Southwest is used to getting feedback. And this is one story they loved to hear.

"Her kindness and helpfulness made the Gooch family's trip brighter, and it's that type of focus on hospitality that makes the Southwest travel experience an incredible one for so many of our customers," Sonya Lacore, Southwest vice president for cabin services, said in a statement.

Anissa was happy to discover her story was being shared but said she was just doing what she does every day.

"I didn't do anything spectacular," Anissa said, according to Southwest spokeswoman Melissa Ford. "We have so many flight attendants who love families and kids and help them every day."

Still, Gooch said Anissa deserves to be recognized for putting her baby on "cloud 9."

"Anissa is such a special person, and I just know that wonderful things are coming her way in 2016," Gooch said.