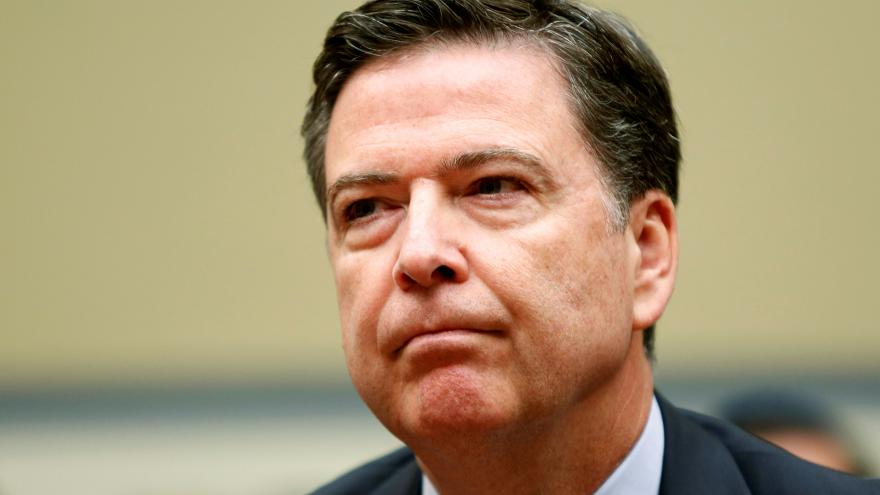 (CBS News) James Comey is set to testify publicly before Congress for the first time on Thursday since President Trump fired him as FBI director last month.

Comey, who was dismissed from his post on May 9, will testify before the Senate Intelligence Committee in open and closed sessions Thursday, with the open session available to watch by the public. He last testified before Congress on May 3 in which he told lawmakers that considering the FBI's effect on the 2016 election makes him "mildly nauseous."

Comey's appearance has been highly anticipated as countless bombshells involving the lead-up to and aftermath of his termination have leaked in the news media over the last month.

Here are some things to watch for during the hearing:

Will Comey reveal anything more about his memos?

Days after Comey was fired, it was reported that he had documented at least one meeting with President Trump in a memo. That memo revealed that the president asked Comey to drop the FBI's investigation into former National Security Adviser Michael Flynn's ties to Turkey and Russia. This is believed to be part of a paper trail Comey left that he used to document "the president's improper efforts to influence an ongoing investigation," according to The New York Times, which first reported on the memos.

The White House denies that Mr. Trump ever asked Comey to drop the investigation -- a line the former FBI director is likely to refute in his testimony.

Soon after this conversation, Comey asked Attorney General Jeff Sessions to prevent him from being alone in a room with President Trump, CBS News' Andres Triay confirmed Monday night. Comey did not disclose to Sessions that the president had requested that he end the investigation into Flynn, the Times reported, and Comey didn't tell a single official at the Justice Department about his conversation with Mr. Trump, sharing the conversation only with his closest advisers.

Assuming Comey wrote more than one memo, how many of them are there? What else did he document after his meetings with the president? And did he keep a record of anything that could in theory lead to a criminal prosecution of White House officials?

Expect questions on obstruction of justice -- and why Comey didn't act

Senators have a number of key questions for Comey about the events that led up to his firing, but one that's been talked about focuses on why he didn't taken action if he believed Mr. Trump had committed an obstruction of justice.

"The question for West Virginians is, 'If you knew, or you thought that there was obstruction of justice, why didn't you act on it?" said Sen. Joe Manchin, D-West Virginia, on "CBS This Morning" Monday. "What were his concerns and if there were deeper concerns, why wasn't anything done at that time?"

But even if Comey testifies that Mr. Trump asked him to drop the investigation into Flynn, CBS News has confirmed that he will not accuse the president of trying to obstruct justice because now, as a private citizen, he can only speak about his own experience. He does not have access to other witnesses and their affadavits and he's not in a position to render a meaningful legal opinion. His intent is that his testimony be purely fact-based.

It's also safe to expect Republican senators to ask pointed questions about Comey's actions while he was FBI director, and his knowledge of practices that could get Obama appointees in trouble, such as the alleged "unmasking" of American citizens caught up in incidental collection. Many Republican lawmakers welcomed Comey's firing, including Senate Intelligence Committee members John Cornyn, Tom Cotton, Roy Blunt, James Lankford and Susan Collins. It would not be surprising if these senators, in particular, ask questions that put Comey on the defensive.

They'll have plenty to work with, too. Since his dismissal, reports have emerged that Comey dramatically overstated the number of emails Hillary Clinton aide Huma Abedin forwarded to her husband Anthony Weiner in prior testimony. Comey also reportedly used dubious Russian intelligence to justify his lengthy July 2016 statement explaining why the FBI would not recommend charges against Clinton after the email server investigation. It's likely that all that will come up again when Comey testifies.

Could Comey disclose more information about the Russia probe?

It's been a nearly a month since Comey was forced out of the FBI, which led to the appointment of former FBI Director Robert Mueller as special counsel to oversee the federal investigation into Russian interference in the election. Now that Comey no longer works for the administration, he could share more information about the federal probe, though he likely won't do that in public.

His testimony will come just days after a highly classified National Security Agency (NSA) report leaked that indicated that Russian government hackers carried out a cyberattack against one U.S. voting software vendor last August and launched a spear-phishing attack targeting local U.S. organizations days before the 2016 U.S. election. The report is dated May 5, and one part says it was based on information that became available in April. A 25-year-old woman who works as a federal contractor was arrested for leaking the document to an unidentified news outlet, which is believed to be The Intercept, which first published the document.

Numerous questions still surround the probe, and Comey is in a unique position to provide answers, which could in theory implicate or clear a number of high ranking White House officials. Everyone from political aide Jared Kushner to Attorney General Jeff Sessions has been mentioned in connection to the Russia probe. And since Comey presumably knows more about the probe than nearly anyone else, he could discuss what leads were bearing fruit -- if any -- before his sudden dismissal.

There is one question in particular, however, that Comey is sure to be asked: Is it true, as Mr. Trump claimed in the letter informing Comey that he had been fired, that the former FBI director told the president several times that he was not under investigation in the Russia probe?

With Mueller now leading the federal investigation, there was some talk about whether Comey would need to first coordinate the scope of his testimony with the special counsel. While the panel's chairman, Sen. Richard Burr, R-South Carolina, said Monday that Comey can't discuss anything that's classified in the open session, he said, "I haven't gotten any indication that he is constrained in any way, shape or form as a public citizen."

Asked whether Comey could discuss his conversations with Mr. Trump, Burr said, "I'm certain that he can." Burr added that he understands that "the special counsel has not fenced him off in any way, shape or form from the items he intends to talk about."

However, there will be a closed session with Comey on Thursday as well. So should he say he is unable to discuss some things publicly, those topics will certainly come up there.

Will Comey confirm that Trump asked him for loyalty?

Another element to watch is whether Comey confirms or comments on some of the reports that have come out since his dismissal. Will he, for example, confirm that President Trump asked for his loyalty when they met in January? Will he confirm that he felt that the president was trying to compromise him by demonstrating an image of closeness between them? Will he confirm that he requested more resources for the FBI's Russia probe?

Should Comey say that Mr. Trump asked him for his loyalty, expect more questions from senators who want to gauge how the then-FBI director took such a request. Did Comey think it was improper, or at least unusual? Comey, however, is expected to stick to the facts, and is unlikely to speculate on Mr. Trump's motives.

It's also safe to assume Comey will be asked if has any knowledge of a White House taping system. Mr. Trump appeared to imply that his conversations with Comey had been taped in a tweet after his firing.

CBS News' Will Rahn contributed to this report.