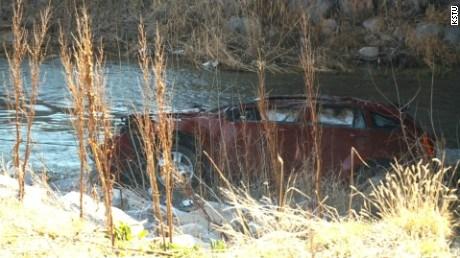 (CNN) When a man went to a Utah river Saturday hoping to haul out fish, he inadvertently saved the life of a baby who had been trapped -- possibly for half a day.

The angler waded into Spanish Fork River around noon, and noticed a car flipped upside down in the water, public safety officials said in a statement.

Rescuers arrived and tipped the 4-door car onto its side. They found the 18-month-old girl strapped in her car seat, still alive. The baby was taken to a Salt Lake City hospital, where she was in critical condition.

Rescuers also found her mother in the driver's seat. She had not survived the accident.

A resident nearby told authorities that he had heard a loud crash the night before around 10:30 p.m. and stepped outside to check, but saw nothing unusual, the Herald Extra reported.

Police say they believe that the car must have struck an embankment at the end of the bridge at that time and veered into the river.

If that's the case, the baby was trapped in the car for about 14 hours.

It's unclear if the baby was covered by water, which was apparently frigid. Seven of the rescuers were treated at a hospital for hypothermia.