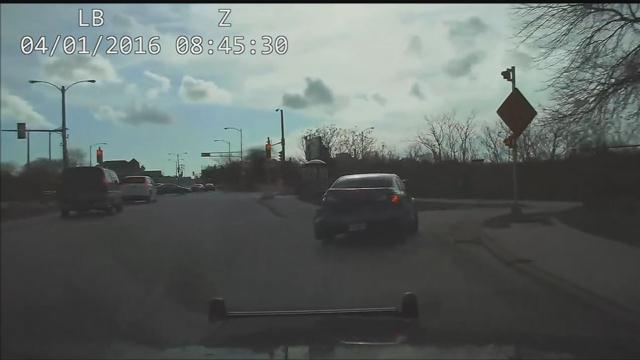 CBS 58- A high speed chase ended with the arrest of a wanted man and it was all caught on video.

It happened April 1. According to the Milwaukee County Sheriff's Office, it started when officers spotted a stolen car, driven by 23-year-old Matthew Hardin, a felon on the run.

Cars swerved to get out of the way as Hardin led Milwaukee County Sheriff's Officers on a chase down North Avenue.

According to police Hardin, a convicted felon, cut off his GPS bracelet and was wanted in connection with a double shooting that happened March 31.

Hardin was put on GPS monitoring in November of 2015, after a judge stayed a prison sentence for a felony theft conviction. Court records show Hardin was also charged with 2nd Degree Reckless Endangerment of Safety, but the charge was dismissed. He also has prior convictions including possession of narcotics.

In a statement Sheriff David Clarke blasted the decision to let Hardin out on GPS.

"This suspect is no stranger to the criminal justice system in Milwaukee County,” Sheriff Clarke said. “This reliance on soft devices to monitor career criminals is too high a risk to the well-being of this community."

According to the county website about the GPS Monitoring program, the only charge against Hardin that would have mandated prison was the reckless endangerment of safety, the charge that was dropped.

"This suspect was the benefactor of a watered down prosecution in exchange for a plea bargain," Sheriff Clarke said.

The chase finally ended after Hardin got on southbound I-43, drove up an embankment to avoid stopped cars, and smashed through a street sign. Officers then boxed him in and made the arrest

The Milwaukee County District Attorney's Office and the judge who put Hardin on GPS did not return calls for comment.