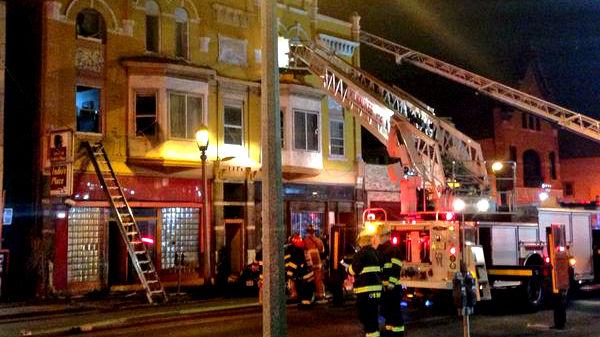 A late Monday night fire that started in an apartment above a bar at Cesar Chavez and National re-ignited Tuesday morning.

There was a partial building collapse and now for safety reasons the entire building will have to be knocked down.

That leaves eight families without a home and no possessions.

\"A situation like this is pretty unusual,\" said Red Cross worker Natalie Czaraowski. \"This puts the fire under us to find new housing. They were told to get out with the clothes on their back and they were not able to get back in to get their car keys to get their wallets, everything is gone.\"

Those who survived are singing the praises of Fransisco Malendez. Many couldn't escape because of the heavy smoke in the hallway so Malendez helped five children out of the building by climbing through a window and jumping to the roof of the building next door.

\"I just wanted to survive,\" Malendez tells CBS 58's Lila Carrera. \"That was the main thing in my mind, to survive and to not let anyone get hurt.\"

Milwaukee Firefighters initially put two alarms on it and helped get 19 people out.

Once they knew everyone was out safely they turned to a defensive approach.

Overnight crews thought they had the fire out, but around 8 a.m. Tuesday they were called back when the flames started up again.

\"The roof is burned through so there is no roof on the structure,\" explained Deputy Chief Terry Lintonen.  \"The back had already collapsed. That's the reason that we've asked the building inspection dept to come in and order an emergency condemnation order so we can get it demolished and torn down today.\"

There has been no ruling on a cause.