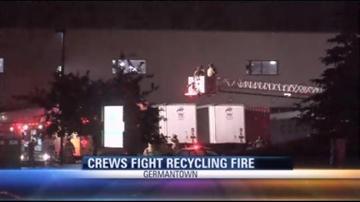 Emergency crews responded to the facility around 10:30 p.m.

Germantown Fire Chief Gary Weiss said trash caught inside the belt of a compactor unit made it more difficult to put the fire out and caused the motor to seize up In flames.

Crews used power saws to put holes in the compactor unit to get to the belt.

Officials said sprinklers prevented flames from spreading throughout the building.

Stay tuned to CBS 58 for developments.