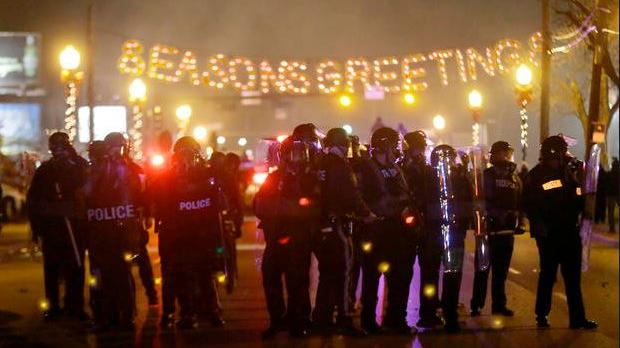 Ferguson, Missouri (CNN) -- As night fell in Ferguson on Tuesday, authorities scrambled resources in a bid to prevent a repeat of the violence that erupted in the wake of the grand jury's decision in the Michael Brown shooting.

Missouri Gov. Jay Nixon ordered additional National Guardsmen to the area, boosting their numbers from 700 to 2,200.

\"We are bringing more resources to Ferguson and other parts of the region to prevent a repetition of the lawlessness experienced overnight,\" the governor said. \"We must do better and we will.\"

Demonstrations devolved into chaos late Monday after it was announced that the grand jury had decided not to indict Darren Wilson in the shooting death of 18-year-old Brown. Wilson, a white police officer, shot and killed Brown, a black teenager, on August 9.

In Ferguson, buildings were burned. Stores were looted and shots were fired. Activists also took to streets across the country, with more than 130 protests planned Tuesday in 37 U.S. states, D.C. and Canada.

\"We are on the side of Michael Brown to fight for what is right,\" the Rev. Al Sharpton said in front of Brown's family. \".... \"We may have lost round one, but the fight is not over.\"

The vast majority of protests in the weeks after Brown's death have been peaceful. And authorities hope to keep it that way.

\"All agree that the violence we saw in the areas of Ferguson last night cannot be repeated,\" Nixon said.