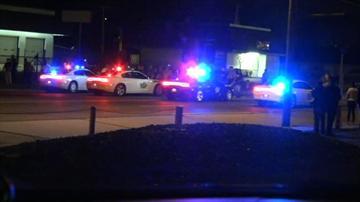 The officer is alive. Police did not comment on the circumstances.

Demonstrators have taken to the streets of Ferguson since unarmed African-American teen Michael Brown was shot by white Ferguson police officer Darren Wilson on August 9.

Despite demands by protesters, Wilson has not been charged in this case, though a grand jury is hearing evidence that could lead to an indictment.

Tensions reignited in the St. Louis suburb on Thursday night after a late-night appearance by Police Chief Thomas Jackson to address the crowd. A scuffle ensued, and arrests were made.

Dramatically wading into the crowd, Jackson apologized for his department's actions after the shooting, but pledged not to resign.

But not everyone was anxious to hear from him.

\"If you are not resigning tonight, go home,\" one man said on a bullhorn.

\"It's never been the intention of the Ferguson Police Department -- or any police department that I know -- to intentionally target individuals because of race,\" said the chief. \"If there is that happening, it's a crime and it needs to be addressed.\"