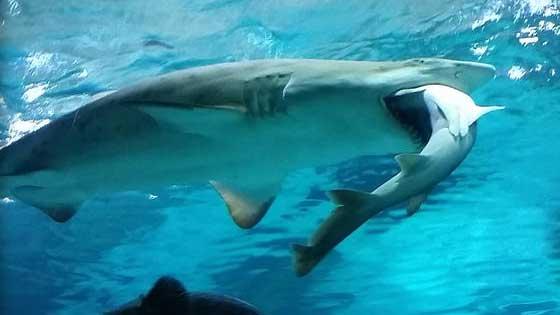 (CBS NEWS) Visitors to the COEX Aquarium in Seoul, South Korea, Thursday were in for a gruesome surprise.

They watched in shock as an 8-year-old female sand tiger shark slowly devoured a smaller 5-year-old male banded hound shark. The 7-foot, 3-inch long female shark apparently cannibalized the male in what is described as a "turf war" within the shark tank, Reuters reports.

The initial attack took place in the early evening, but it took the bigger shark 21 hours to finish off the job, bite by bite. By the next day, all that remained of the male shark was the tip of his tail hanging out of the hungry sand tiger shark's mouth.

"Sharks have their own territory. However, sometimes when they bump against each other, they bite out of astonishment," the aquarium's PR manager, Oh Tae-youp told reporters. "I think the shark swallowed the whole body, because they usually eat it all when they bite the head part."

In case the sight wasn't shocking enough, the aquarium said that the deceased shark's tail will most likely remain hanging there for around four or five days. But the female shark will be unable to fully digest her conquest, and will eventually regurgitate it up about a week later, Reuters reported.