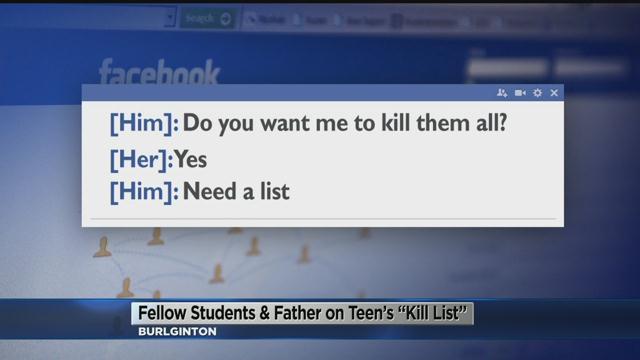 Two middle school students are under arrest after a Burlington mother found a "kill list" made by her 15-year-old daughter.

On that list was her own father and a number of classmates.

The superintendent said some students have asked for the help of a counselor after four students were targeted.

The school was notified when the girl's mother saw a Facebook message between her daughter and her daughter's 14-year-old boyfriend.

He asked, “Do you want me to kill them all?”

The teen sent a list with four of her fellow students and her father.

When asked about the list, the girl told officers she has thoughts that she shouldn't think of and she has a really dark mind.

Her boyfriend told police he wouldn't actually go and kill these people and only talked about it to make her feel better.

The superintendent said a letter was sent out to parents, and the school is safe.

The teens are out on bond, and were placed on house arrest.

They will be back in court next week