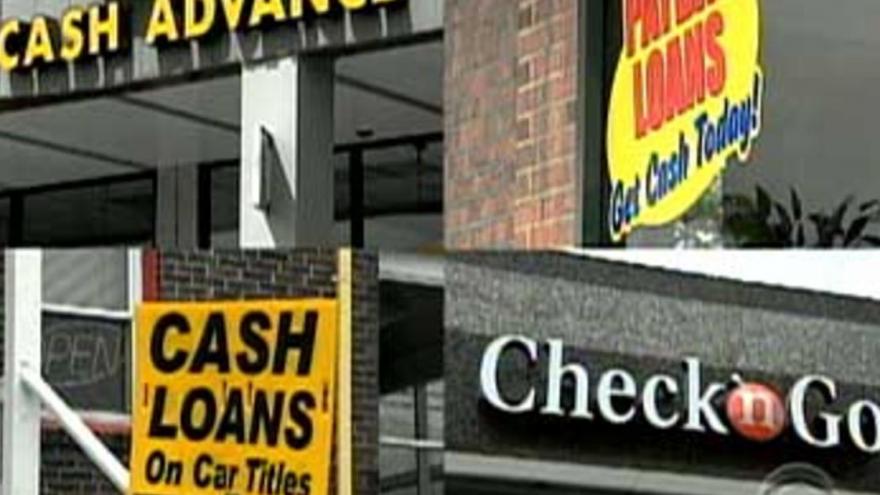 NEW YORK  - Payday and auto title lenders will have to adhere to stricter rules that could significantly curtail their business under rules finalized Thursday by a federal regulator. But the first nationwide regulation of the industry is still likely face resistance from Congress.

The Consumer Financial Protection Bureau's rules largely reflect what the agency proposed last year for an industry where the annual interest rate on a payday loan can soar to more than 1,000 percent. The cornerstone is that lenders must determine before giving a loan whether a borrower can afford to repay it in full with interest within 30 days.

A key goal is to prove that borrowers, who are often in dire situations, are able to pay without having to renew the loan repeatedly. The rules would set limits on the number of times a borrower could renew the loan. Because studies by the CFPB have found that about 60 percent of all loans are renewed at least once, this cap is likely to severely wound the industry's business model. In California, the largest payday loan market, repeat borrowers made up 83 percent of the industry's loan volume.

"Too often, borrowers who need quick cash end up trapped in loans they can't afford. The rule's common-sense ability-to-repay protections prevent lenders from succeeding by setting up borrowers to fail," CFPB Director Richard Cordray said in a statement.

Every year, some 12 million people borrow a total of $50 billion, spending some $7 billion on interest and fees alone, according to The Pew Charitable Trusts. An estimated 16,000 payday loan stores operate in the U.S. across 35 states, with hundreds more such lenders operating online.

The CFPB estimated that loan volume in the payday lending industry could fall by 66 percent under the new rules. The industry will likely see thousands of payday lending store closures nationwide. Regulation of the sector has been largely left to the states, 15 of which effectively ban payday lending or auto title lending due to the caps on interest rates.

While the industry may garner little sympathy from the public, there is an economic need for small dollar, short-term loans, and people who use payday loans now might turn to other high-cost ways of making ends meet, like using pawn shops. The payday lending industry has a significant lobbying presence in Washington, and Republicans tend to be hostile toward any regulations proposed by the CFPB, which was created by the Obama administration.

Yet some experts think banks and credit unions could pick up the slack in offering short-term installment loans, and at far lower cost than what payday lenders offer.

"Bank and credit union regulators must now create the clear guidelines these lenders need in order to make small installment loans safely and profitably," Nick Bourke, director of The Pew Charitable Trusts' consumer finance project, said in a statement. "If they do, millions of consumers can save billions of dollars by gaining access to lower-cost credit."

Doug Farry, co-founder of Employee Loan Solutions, a program that lets employers offer small loans to their workers, expects the fight to now shift to state and local governments, which must enforce the CFPB rules and also determine what is appropriate for longer-term installment loans.

"We are seeing that already in California, where there are currently no interest-rate limits on long-term installment loans, so consumers with bad credit may be still paying triple-digit interest rates for longer-term, small-dollar loans," he said by email.

In addition to the "full payment test" and the limits on loan renewals, the CFPB rules would also restrict the number of times a payday lender can attempt to debit a borrowers' account for the full amount without getting additional authorization.

Liberal-leaning consumer advocates, who have long pushed for additional regulations on the industry, cheered the decision.

"Payday and car title lenders profit from repeatedly dragging hard-pressed people deeper and deeper into debt, and taking advantage of families when they are financially vulnerable," said Lisa Donner with Americans for Financial Reform. "Curbing the ability to push loans that borrowers clearly cannot repay is a key protection."

Mike Calhoun, president of the Center for Responsible Lending, thinks the new rule will disrupt abusive payday lenders' business model. That model "thrives on trapping financially distressed customers in a cycle of unaffordable loans," he said in statement praising the CFPB.

The Consumer Federation of America also urged lawmakers to extend a 36 percent interest-rate cap on payday loans to active-duty U.S. servicemembers to all consumers.

But there are bills pending in Congress to more severely restrict the types of regulations the CFPB can propose, and Republicans have called for President Donald Trump to fire Cordray. Another bill would roll back other consumer protections the agency has finalized, most notably the rules ending what is known as forced arbitration, where banks and financial companies can force consumers into third party arbitration instead of allowing consumers to file class-action lawsuits against them.

Before Thursday's announcement, the only federal regulation that applied to the payday lending industry was the Military Lending Act, which places interest-rate and debt-collecting restrictions on loans to servicemen and women. This would be the first time all consumers would be impacted.

The CFPB's rules imply that the bureau clearly wants banks and credit unions to take over the small-dollar lending industry. Financial companies are exempt from the rules if they make less than 2,500 loans a year and earn less than 10 percent of their revenue from these types of loans, which fits into the bank and credit union's business model. The Credit Union National Association, the trade group for the credit union industry, said they are "closely analyzing" the CFPB's new rules.

At the same time as the CFPB released its new rules, another federal regulator, the Office of the Comptroller of the Currency, announced that it was rolling back some restrictions it had placed on payday lending-like products known as deposit advance products. This could allow banks to step into the payday lending space.

The new rules will take effect 21 months from when they are published in the Federal Register, which usually happens within a week of an announcement.