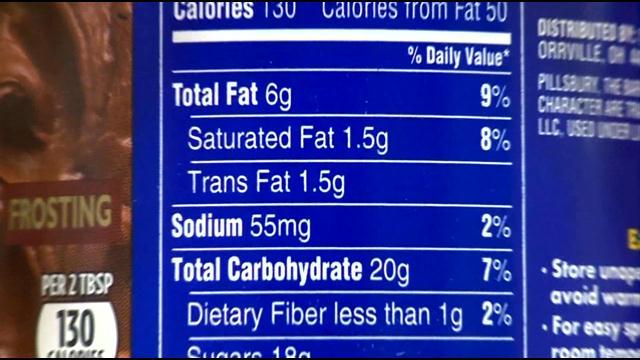 It's official trans fats are out of the American diet. Tuesday the FDA ruled that trans fat which is man made is not \"generally recognized as safe \" for use in human food.

Trans fats are most often found in packaged foods, like the ones you see in a vending machine, but now, the FDA says these food manufacturers have just three years to get it out for good.

Trans fat. We've all heard it's bad. But when we asked, not too many people knew exactly what it was

\"I really don't know much about trans fat,\" said another.

So we asked nutritionist Jeff Langolis who says its a man-made saturated fat, like vegetable oil, that has hydrogen added to it, to make it more solid.

\"Basically you're eating plastic. The reason food manufacturers love to use it is it gives them a long shelf life so its purely economical, its terrible for our bodies,\" said Langolis.

Even in small doses, dietician Nicole Kerneen says its got a big impact on your body.

\"They can harden the arteries very quickly; they can cause clogging in the arteries. Basically they just hurt our hearts,\" said Kerneen.

Trans fat consumption has gone down since 2006, when manufacturers had to start listing it on package ingredients.

\"So anything that says hydrogenated vegetable oil or partially hydrogenated, literally, should never be eaten,\" said Langolis.

And are even seen in \"fresh\" foods at your local grocer.

\"So they're putting plastic in the pumpkin pie. Ugh. Because its cheap and its got a long shelf life,\" said Langolis.

So they're happy to see it go and they say your taste buds won't notice the difference.

\"Some restaurants use them because they improve texture. I would say that that stuff is happening on a very minimal level and we're really not going to notice it,\" said Kerneen.

The companies can petition the FDA for a special permit to use the partially hydrogenated oils and the grocery manufacturers association, the main trade group for the food industry, is doing just that.