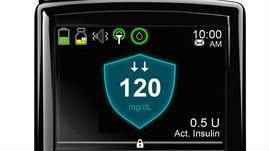 “This first-of-its-kind technology can provide people with type 1 diabetes greater freedom to live their lives without having to consistently and manually monitor baseline glucose levels and administer insulin,” Dr. Jeffrey Shuren, director of the FDA’s Center for Devices and Radiological Health, said in an agency news release.

The device -- Medtronic’s MiniMed 670G -- is what’s known as a hybrid closed-loop system. That means it monitors blood sugar and then delivers necessary background (also known as basal) insulin doses. The device will also shut off when blood sugar levels drop too low.

However, this device isn’t yet a fully automated artificial pancreas. People with type 1 diabetes will still need to figure out how many carbohydrates are in their food, and enter that information into the system, the agency noted.

Medtronic said the new device will be available by Spring 2017. The FDA approval is currently only for people aged 14 and older. The company is now conducting clinical trials with the device in younger patients.

Type 1 diabetes is an autoimmune disease caused by a mistaken attack on healthy insulin-producing cells in the body, destroying them. Insulin is a hormone necessary for ushering sugar into cells in the body and brain to provide fuel for the cells. People with type 1 must replace the insulin their bodies no longer produce, through multiple daily injections or through a tiny catheter attached to an insulin pump.

However, figuring out exactly how much insulin to give is no easy task. Both too much and too little insulin can have dangerous, even deadly consequences.

The device does this via a small catheter inserted beneath the skin and attached to a tube that’s attached to an insulin pump. This insulin delivery site needs to be changed approximately every three days.

If blood sugar levels are too low, the device will shut down insulin delivery.

In a statement, Aaron Kowalski, chief mission officer for JDRF (formerly the Juvenile Diabetes Research Foundation), said until there’s a cure for type 1 diabetes, “I know that the artificial pancreas will change many lives for the better.”

“People who have participated in artificial pancreas clinical trials have not only attained better overall [blood sugar] control, but have experienced the relief of sleeping through the night and waking up in the morning with blood glucose levels within target range. That’s an improvement in quality of life that will be available to others living with type 1 diabetes very soon as a result of the FDA’s decision,” he said.

Melinda Rose -- who has a grown son with type 1 diabetes, diagnosed when he was just 13 years old -- expressed excitement over the approval. The artificial pancreas “will revolutionize the way in which a person with type 1 diabetes manages this disease. In human terms, the parent of a child with the [artificial pancreas] system will now be able to sleep through the night and worry less.”

“With the development of electronic devices to deliver insulin and measure blood glucose, the dream has been to tie everything together and have an ‘artificial pancreas,” he said. “The greatest inhibitor has been the complexity of insulin delivery and the development of algorithms that can come close to what the normal body does,” Bernstein explained.

“This is a welcome step forward for people with type 1 diabetes,” he added. “It will be many years for a biologic cure or prevention, and it is exciting to know that life can be better until the next best thing comes along.”

According to JDRF, there are currently 18 artificial pancreas systems in various stages of development, with Medtronic’s being the first to receive FDA approval.

Medtronic was also the first, and so far only, company to receive approval on what’s known as a “low-suspend” pump. That device, approved in late 2013, shuts off automatically when blood sugar levels go too low. However, unlike the newly approved device, the low-suspend pump did not provide insulin delivery.

According to the agency, the FDA approval is based on data from a clinical trial of 123 people with type 1 diabetes. The study volunteers wore the device for three months. No serious low blood sugar (hypoglycemia) events occurred. And no one experienced diabetic ketoacidosis, a serious complication that can occur if someone doesn’t get enough insulin, according to the American Diabetes Association.