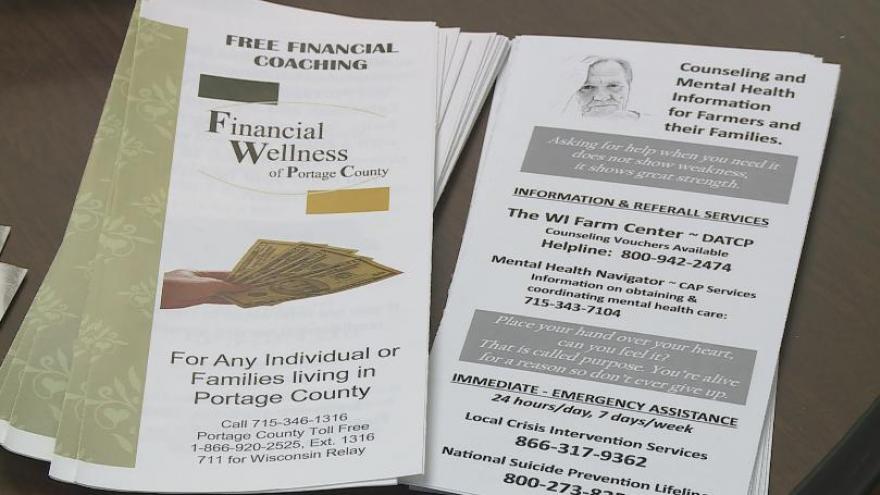 MARSHFIELD, Wis. (WSAW) -- The farming economy has been in a slump, and farmers are continuing to face issues as they try to sell their crops or products. One farming organization is trying to support farmers, as they deal with a bad economy with slim profit margins.

The UW-Extension Clark County chapter hosted a meeting Thursday called 'Farming in Difficult Times,' where several people spoke about not only the issues farmers are facing, but the stress they're dealing with. They also want farmers to know there are ways to cope.

"One thing about farmers, they're very isolated, and a lot of times when they're in some sort of a stress they pull in rather than go out. So they need to get help maybe to talk about their problems," said Halopka.

Those problems are often dealing with stress in a tough economic time, when there's little profit margin. It doesn't only affect farmers, but the community where they live and work.

"There's also that dwindling source of income that can come into a community. So the community relies on those farmers that live in that community to bring income into that community," said Halopka.

At the meeting; farmers, farming professionals, and AG professionals could learn how to deal with the stress that often comes with the job.

"We want to give people some of the warning signs that people may be thinking about harming themselves. We want to avoid some of the domestic abuse issues," said Halopka.

"If you can pick up on some warning signs , because you're out there and dealing with the public," said Keith Nemec, a former farmer turned crop insurance adjuster.

Teaching about warning signs and resources that are available, for any farmer who may need help.

"They're confidential. They can call in and talk to a person, to try and get some assistance, some support for their situation," said Halopka.

"If you need somebody to listen to them, there's always somebody out there that will listen to you. All you got to do is ask for help," said Nemec.

One of the biggest resources for farmers is the Farm Service Center through the Department of Agriculture, Trade and Consumer Protection. You can find that website here.

Another resource for farmers is the UW-Extension Agricultural Safety and Health website, which you can find here.