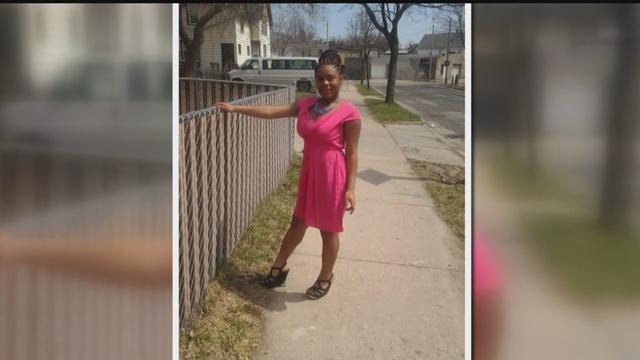 The family of 15-year-old Melanie Johnson says police have suspects in custody revolving her death.

The day after the 15-year-old was shot and killed, Milwaukee Police say they do not think the shooting was random. Police are not releasing many other details, except they are seeking a suspect or suspects.

The family of Melanie Johnson say they believe the shooting was targeted, but Melanie was never supposed to be shot. They say they cannot comment on who was the target because of an ongoing investigation.

Melanie Johnson died when a bullet flew through the side window of her home. She lived there with her siblings and their mother.

Much of her family was around when it happened.

"I'm numb to the situation but on the insides... It's eating me up. I watched her. I witnessed her get shot and die in my face," said Keyonta Davis.

"We was just all in the kitchen talking. Melanie just hit the f****** ground, I drag her in the hallway, try to make her hold her breath. She couldn't even do that."

Melanie's younger sister Twana was also there as she took her last breath.

Family member Mollie Johnson says Melanie died a hero. When the family heard gunshots, they scattered, but Melanie went back to shield her 9-month-old nephew. Johnson says she was shot while covering him with her body.

Family says Melanie was a selfless person and always cared about others. Johnson has set up a page to raise donations for Melanie's funeral. You can find it at www.gofundme.com/help-for-our-heroine-melanie

Haney is Melanie's older sister. She rushed home from work when she heard the news.

MILWAUKEE - Milwaukee Police were called to the area near 35th Street and Silver Spring Monday evening where 15 year old Melanie Johnson was shot to death. Investigators say someone outside, fired shots inside the building where Johnson lives. Her family says the bullets went through the kitchen window while she, her siblings and mother were at home. Investigators say its not clear whether the shooter was in a car or not, and believe Johnson was not the intended target, although they aren't certain about that yet.

Police are still looking into a possible motive and do not have suspect information at this time. However, we spoke to Kendra Haney, Johnson's older sister who saw her little sister just hours before she was killed. Haney says her sister was a good kid, they had a Gemini connection, she loved to read, did a lot of babysitting and she doesn't believe she was targeted on purpose.

According to her family, Johnson was a student at John Marshall High School in Milwaukee. If you have any information about this fatal shooting click here to contact the Milwaukee Police Department.