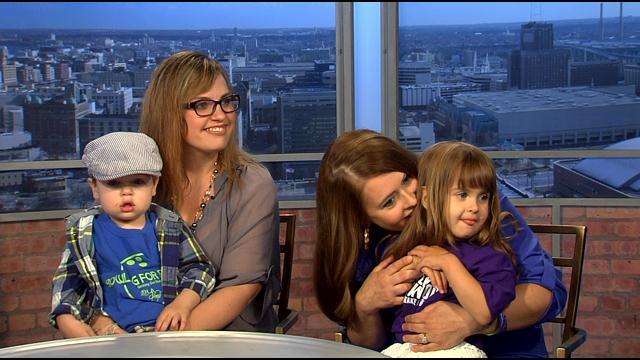 In March of 2013 we first met Abe Sloan and his family. The little baby boy had been shaken by a relative who was baby sitting.

He has endured surgeries to address bleeding on his brain.

The family was determined to bring something positive to this difficult and dark time. They have formed a support group through Waukesha County Victim Services.

They also created \"Bowling for Babes\" at the New Berlin Bowl to raise money for Lola's Hope.

The non profit foundation is named after another local shaken baby survivor.

Lola, Abe and their mothers were lives guests on the CBS 58 News at 4 p.m.

The mothers say that the extent of the neurological damage to their children won't be fully known until they attend school.

Abe is showing great progress with therapy and his mother,Gretchen, along with Lola's mom, Krysta Bernicky, think the message to never shake a baby might finally be taking hold.

\"We're connected with people all over the world with our Facebook page,\" Bernicky told CBS 58's Michele McCormack. \"I think the prevention message is getting out there.\"

While it is a sad topic, the families also know how important it is to share in the joys of life. They're inviting the public to the upcoming Bowling for Babes event at New Berlin Bowl Saturday, June 20th.

Registration begins at 11:30 a.m. with bowling starting noon and going on for five hours. There will also be raffles throughout the event and Loal and Abe will be there with their families to say thank you.