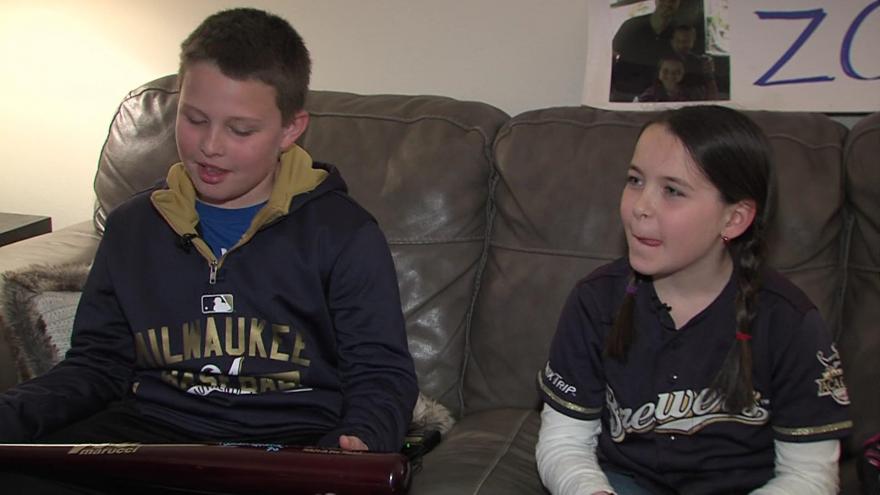 A pretty scary experience for a young girl and her brother at Brewer's Opening Day. The family talked about the terrifying moment a baseball bat came flying towards them.

The kids had the day off of school so their parents surprised them with seats up front on Opening Day. But the real surprise came when that bat flew their way. Thanks to her brother's quick thinking, Olivia is doing just fine.

A day at the ballpark with tickets right in front turned bittersweet for Olivia and Jake Rechlitz.

That's because Jake proudly caught the bat as it flew into the stands. Olivia was in tears and a little shaken up.

\"I didn't really see it until it was like right here. What I did was go over here and try to protect our heads.\"

\"I felt kind of embarrassed because everybody was looking at me. How much did it hurt? Probably 1-10, it probably hurt a 6 or 7.\"

Olivia is okay. Ballpark medics came and iced her knee. Then, both teams gave them the star treatment. Brewers owner Mark Attanasio autographed a baseball and a Rockies player autographed a bat.

\"I got my glove signed by Ryan Braun.\"

The Brewers just replaced netting behind home plate last year after a woman was injured two years ago when a ball hit her in the face. The Rechlitz were sitting right where it ends.

\"I don't know if the net would have helped in this case because the bat went up in the air but yeah, it was an interesting day.\"

With a very important lesson for Olivia - \"Look at the batter and see if the bat is flying.\"

Dad says this is his 8th home opener, by far the most exciting. Both of the kids say they hope to go to more Brewers games this year but they may not sit in those same seats.