Explainer: Where you can drop off your absentee ballot in Milwaukee

Explainer: Where you can drop off your absentee ballot in Milwaukee

If you requested an absentee ballot by mail, the city of Milwaukee is reminding voters of their options on how to return it after a judge banned the use of unmanned ballot drop boxes.

Starting on Tuesday, voters can return their ballot to any of the nine early voting sites during early voting hours.

Additionally, the next two Saturdays, on March 26 and April 2, voters can show up at one of the nine early voting locations to use a convenient drive-up option to drop off their ballot without leaving their vehicle. This will be available from 10 a.m. - 3 p.m.

Trained election officials will be on site to make sure ballot envelopes are filled out correctly and secure them ahead of Election Day. Claire Woodall-Vogg, executive director of the Milwaukee Election Commission, said it will give voters more options to drop off their ballot.

"We think voters deserve to have another option to return their ballot without having to go down to City Hall," Woodall-Vogg said. "Voters can trust that we would not do anything at all that would jeopardize their ballot."

The drive-up, staffed drop boxes are new this election after a Waukesha County judge ruled to ban unmanned drop boxes for April's election.

The Wisconsin Institute for Law and Liberty, who led that challenge that resulted in prohibiting drop boxes, declined an interview with CBS 58. Woodall-Vogg said she doesn't anticipate a legal challenge to their drop box options.

"This is not a workaround," Woodall-Vogg said. "We read the judge's order. We've researched it and we feel very confident [because] he stated this is allowed."

You can still return you ballot by mail, but officials are urging voters to do so early to guarantee it arrives at the clerk's office before Election Day.

As of Monday, 26,050 absentee ballots were sent to Milwaukee residents. CBS 58 has learned that 90 of those were not initialed by an election worker. Woodall-Vogg said she is aware of the issue and called it a human error. She emphasized those ballots will not be disqualified and still count on Election Day.

"In this case, we know the affected ward and it would be perfectly explainable – nothing suspicious," Woodall-Vogg said. "We have offered to mail new ballots to any voters who call for their peace of mind."

Voters who wish to receive new absentee ballots can contact the clerk's office at 414-286-3491. 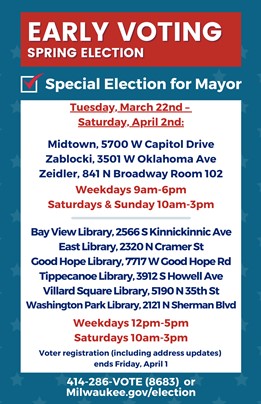 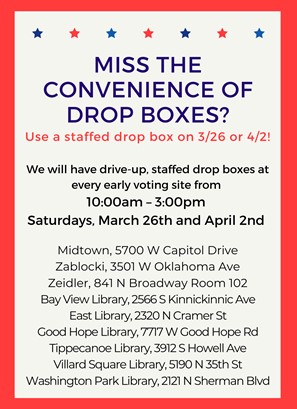