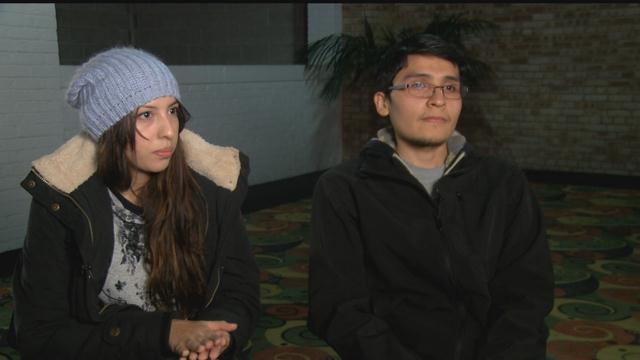 They saw the crash that left three women riding in an UBER dead and are speaking exclusively to CBS 58's Amanda Porterfield.
They not only saw the accident happen, but stopped to help, and chased down the drivers that ran away.
Cecelia Grant and Hector Tovar were at the stop light on 2nd and Clybourn when they say a Lexus blew passed them, through the red light and hit another car.
"When the Lexus rammed the car it spun then hit the concrete pillar after that they just crashed straight into each-other," said Tovar.
Tovar says two men in the Lexus got out, put their hoods up and ran away.
"I just chased after them. I had this whistle and I was blowing it. They made a ran for it to try and escape. and my thought was that's BS you should come back and help them.  Instead they tried to make a getaway," said Hector Tovar.
The UBER driver went to the hospital. All three women in the backseat died. Amy Taylor, Ashley Sawatzke and Lindsey Cohen were all friends visiting Milwaukee from Chicago. They at one time all worked together at a Chicago advertising agency.
"I was very shocked. I didn't know how to react to that. And I freaked out a little over the phone whoever i was talking to on the phone was just saying stay calm, focus on me. I was like there's three of them we need an ambulance. I hated to see them like that." said Cecelia Grant.
One person claiming to be driving the Lexus that night surrendered to police. We aren't naming him because he hasn't been charged. We do know he's been arrested for DUI.
Milwaukee Police say the other man they believe was in the car has been arrested on an unrelated warrant in Pleasant Prairie.
Investigators say they found rolling papers and Adderall pills inside of the Lexus.  The 2015 Lexus RX350 is registered to a Karnjit S. Randhawa from Mequon. We went to their home while they were inside, but no one answered the door.
"I think about it over and over again. I'm trying to cope with it. It really made us both realize that life really is short," said Cecelia Grant.