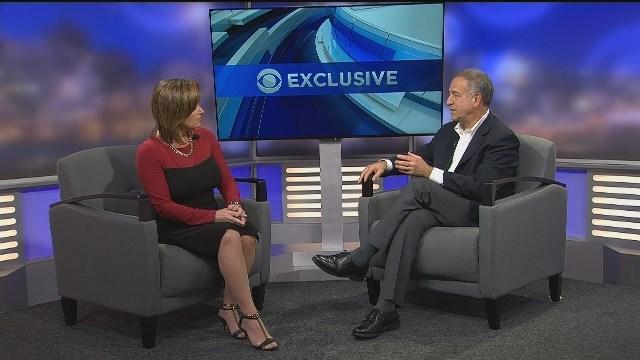 Russ Feingold says it's not that he wants his Senate seat back.

Rather he says it's the senate seat of the people of Wisconsin who have told him that they may have jobs, but they can't pay their bills.

"We need to make sure people have a living wage, work hard and enjoy a little bit of free time. The U.S. Senate as difficult as it is, we need to fix it. I worked on many bi-partisan bills.  I know how to do that. I'm eager to get back and see if we can work together instead of being divided."

Feingold was a special live guest on the CBS 58 News at 4 p.m.

It is a regular interview feature brought about from viewer requests to see more in depth conversation with the news makers and elected officials of our state.

"I believe if you have a good strong increase in the minimum wage, our workers will have money in order to spend money on things."

He then directly criticized the man who took the Senate seat from him last election.

"Mr. Johnson doesn't even believe that we should have a minimum wage so the difference is enormous.  How can we have a situation where the very wealthy do so well and there's no fairness."

He also maintained that he had the correct approach to facing the challenges of undocumented workers, by once again, contrasting his position with that of his perceived opponent Ron Johnson.

"He says we have to close the border. That's avoiding the problem. A complete lack of leadership. Many undocumented people are working, we have to get them out of the shadows. Maybe it will take years and they have to pay some kind of penalty."

Feingold also expressed disdain for how the scandal involving the over prescription of medications at the Tomah VA Medical Center has become politicized.

"I don't think the issue should be made into a political issue. We have to make sure the V.A. is safe. Veterans say they like the V.A."

Feingold is against any movement to privatize the V.A.

"The veterans told me here in Milwaukee they need the V.A. That it's a good system that can be improved. Let's not turn this into a political football."

He refuted the notion that campaign finance reform for which he once championed so hard has fallen away.

"It's suffered from a terrible supreme court decision that allows corporations to spend unlimited money on campaigns for the first time in 100 years. We're gonna get back there and do something to overturn that decision. We're going to make that the average citizen with a small contribution as the opportunity to be part of the process and not get crushed by corporations."