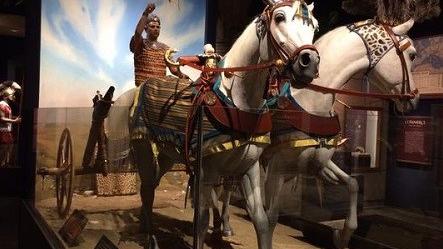 The Milwaukee Public Museum will unveil its first permanent exhibit in more than ten years next month. CBS 58 was given an exclusive preview Thursday morning.

Below are details from MPM:

Crossroads of Civilization: Ancient Worlds of the Near East and Mediterranean, the first new permanent exhibition from the Milwaukee Public Museum in more than a decade, will open on March 15, 2015. The exhibit, made possible by the Northwestern Mutual Foundation, explores how the ancient civilizations of Africa, Europe and Asia came together to form an epicenter of complex culture, creating not just a physical crossroads, but an intellectual one as well.

Drawing on decades of Museum-led excavations and research, Carter Lupton, MPM's Curator of Ancient History, and the MPM exhibits team bring the ancient world to life by presenting over 200 artifacts from the Museum's collections alongside dynamic interactive technologies and all-new interpretive content based on emerging research.

“Crossroads of Civilization highlights the ancient world of the Near East and Mediterranean, featuring collections that have been off view for years. Our creation of this exhibit is significant to the community not only because Egypt, Greece, Rome and Syria have been part of the focus of MPM's field and lab research, and are popular with the general public, but they are part of the curriculum in local middle schools,” said Carter Lupton. “Technological advances and changing visitor expectations have given us impetus to combine and interpret existing collections in new ways and this exhibit is the product of that. Crossroads presents far more historical information than ever before in a fun and exciting venue, combining state-of-the-art digital interactives and dramatic new artistic features with our collections.”

This exhibition contains life-size figures created in-house by the MPM exhibits team, such as visitor favorite the Greek hoplite warrior and the newly produced Persian archer. MPM is one of the few museums that still produce life-size figures and exhibits in house. The centerpiece of Crossroads of Civilization is a recreation of King Tutankhamun in his chariot. Using the latest medical research from Tut's mummy, Museum artist Craig Yanek has sculpted a full-size forensic reconstruction of the boy king shortly before his death.

Visitors will also be able to view Padi-Heru and Djed-Hor, the two Egyptian mummies in MPM's collection. New digital sequencing technology allows visitors to peel back the layers of Padi-Heru to examine the details of his mummification and see an unexpected dramatic medical procedure on Djed-Hor. Other interactive components include a digital exploration of the interior rooms of Medinet Habu, the temple of Pharaoh Ramesses III, an interactive touch-screen timeline of the earliest civilizations of Egypt and Mesopotamia, large digital maps depicting the ebb and flow of ancient empires, and time-lapse videos of the making of the exhibition.

“There are many aspects that set Crossroads apart from the other exhibits we've unveiled over the years at MPM, but one of my favorites is the integration of technology,” said Dennis Kois, president and CEO of the Milwaukee Public Museum. “Visitors can travel through a temple interior, see inside a mummy, and for the first time at MPM the exhibit design allows us to update content as time moves forward, information changes, and more research becomes available.”

This unprecedented glimpse into over 5,000 years of interaction between Egypt, Mesopotamia (Iraq), Greece, Rome and the later cultures of the Near East and Mediterranean (Iran, Turkey, Syria, Jordan and Tunisia) is broken up into six thematic areas that were common to early civilizations and are still relevant to how societies function today: Construction, Communion, Community, Communication, Commerce and Conflict. The exhibition features items from each of these themes including ancient pottery, coins, jewelry and weapons.