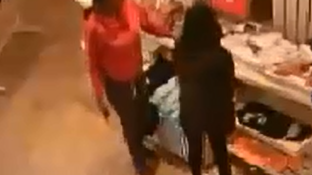 A warrant filed last week in Waukesha County shows Brookfield Police are continuing an investigation into a March armed robbery at a Victoria’s Secret.

A manager comes over and puts one of the piles back in its place, seconds later; the two women grab clothes and start to run.

The manager tries to chase, but according to police, one of the women pulled out something that looked like a stun gun and told the manager to step back.

You can see in the surveillance video that object lights up, and the manager stops chasing after the two women.

This was back in late March, and the two suspects are still on the loose.

Police say the two suspects got into a Hyundai in the parking lot. An off duty officer was at the mall at the time, and saw part of the license plate. The officer said the plate had “4-0-8” in it, but that was not enough to nail down the suspects.

In that one, two women got into a white Hyundai with a Minnesota plate.

Police believe that the car used in both crimes was stolen from a Milwaukee pizza delivery driver six days earlier.

That delivery driver told police she was dropping off a pizza near this apartment complex in the 9000 block of North 75th Street; then two women jumped in her car and locked the doors.

The delivery driver tried to stop them, but was dragged as the thieves drove away.

The delivery driver was able to get her car back, but right now police are trying to track down the suspects by following the phone number they used to order the pizza in March.

The problem is, that phone number traces back to the voice over internet provider that operates Google Voice, [a service that provides a phone number but is not connected to the cell phone company.]

Brookfield Police ask you to give them a call if you recognize the suspects, or know anything about the robberies; the phone number is 262-787-3702.