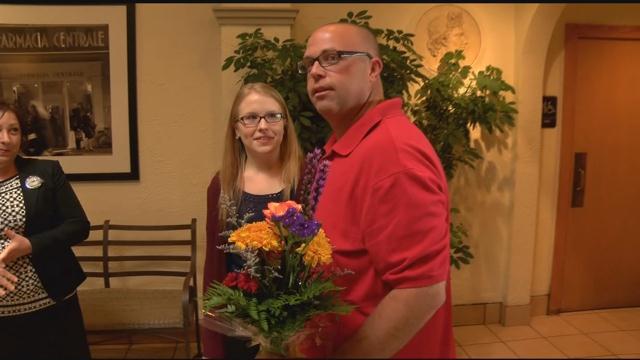 A follow up to a story we brought you two weeks ago.An Olive Garden server from Racine is alive today, thanks to the heroic actions of a diner.
In a story you'll only see on CBS 58 they were reunited Saturday at the restaurant and our cameras were there.

It was celebration of life and big thank you for Brian Wenzel who says he was just in the right place at the right time, doing what any good man would do.
A trip to Olive Garden, greeted with fanfare, a line of grateful employees and one very thankful server.

Because Saturday was the first time Brian Wenzel saw the woman he rescued server Jamie Gulland.

\"The second I walked in and saw her it kinda overwhelms you to know you saved someone's life,\" said Wenzel.

Jamie has a new lease on life after nearly losing hers at the Racine Olive Garden two weeks ago.

\"Just here at work like any other day and I started getting this feeling and it actually happened about a month prior where I had the exact feeling and had a seizure and had to be rushed to the emergency room,\" said Gulland.

Fearing the worst, Jamie went to the kitchen to find her sister who also works there.

\"She says I walked up to her and started whispering her name. And then I started to fall on her and then another coworker came and helped pull me down to the ground and that's as much as I can recall,\" said Gulland.

Brian had just sat down at this table and was enjoying a drink when his server walked up to him and asked if he knew CPR. When he said yes she said, \"Follow me to the kitchen!\"

\"When I got in there I saw a bunch of people standing around a girl laying there not breathing,\" said Wenzel.

Wenzel, a correctional officer, says he sprang into action, administering CPR and talking her through a seizure until the fire department got there.

\"I stood there in the kitchen for a few seconds and then turned around and walked back and sat down,\" Wenzel says.

He says, he never expected a thank you but today he and friends were treated to a meal and limo ride in thanks.

Jamie is now recovering, after being hospitalized for nearly a week and having two more seizures since this incident.

She's grateful to have a guardian angel.

Doctors still don't know why Jamie is suffering from the seizures, but she says, regardless, she is heading back to work next weekend.