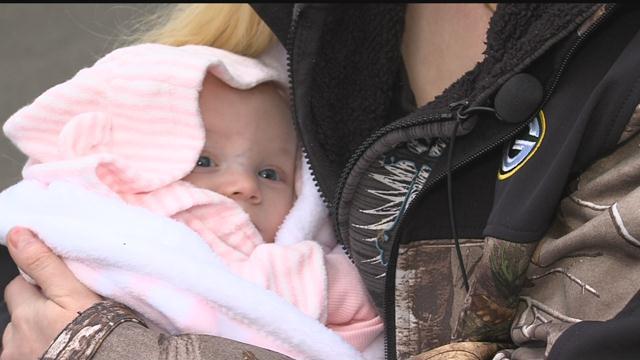 In an effort to save her baby's life, a Lake Geneva woman threw the three-month-old from the roof of their burning home to police officers who were waiting below. Monday night, she told her harrowing story only to CBS 58's April Dovorany.

The family agreed to meet us at the home on Elm Street and they say just looking at this home is a reminder of the horrible experience they went through and how much they've lost.

"Baby stay with me! My house is on fire! Me and my mom and baby are on the roof!"

The frantic 911 calls paint a picture of what happened here but Megan Valum says it was worse than you could ever imagine.

"I was gonna die. I really thought that was it. It was very scary," said Megan.

While her fiancee was gone at work, smoke started pouring into the second floor apartment they share with Megan's mother, right as Megan was giving three month old baby Alexie a bath.

"I opened the door because I thought we could get downstairs but it was filled with black smoke everywhere," said mom Cathy Valum.

"She started coughing, I had to get her out," said Megan.

Mom and daughter escaped to the roof with  Alexie in just a diaper and blanket, through a door in their bathroom.

Megan says it was the scariest moment of her life clinging to the baby on the roof of their home, not knowing if they would make it down alive.

"You could hear everything, the glass breaking, the walls falling apart, the floors caving in. And it was bad. I don't know how much longer we would have had on that roof. I really don't," said Megan. .

Within minutes Lake Geneva police arrived and asked Megan for the ultimate act of trust: Throw the three month old to them.

"It was hard because we really couldn't see each other, the smoke was that bad. And having a baby is scary because you don't wanna land on her or have her get hurt, and everything is ice too and its cold," said Megan.

Alexie landed safely in the arms of a police officer.

"She was freaking out herself. She was crying, and she wouldn't let go of me. She knew something was wrong," said Megan, about Alexie's condition.

But Megan slipped and fell off the roof, breaking her heel. Mom Cathy was saved when officers climbed up a ladder to get her.
The family is happy to be alive but now struggling financially with no home, no belongings and Alex staying home to care for baby while mom and grandma recover.

"It sucks to watch everything you own just burn. All your important stuff, to your memories," said Megan.

The family says the community has been so supportive but there's still so much that they need. They have found a new place but can't move in until Friday, so they are staying in a hotel, which they are paying for out of pocket. The expenses are getting to be too much for the family, as Alex can't work while he cares for Alexie and the rest of the family.

The family needs everything-money, furniture, clothing, and day to day toiletries and other goods. There are a couple of places that have already been helpful to the family and are places where you can drop donations: