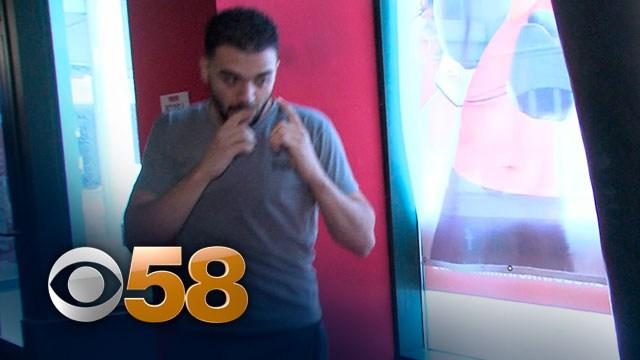 The Federal Bureau of Investigation Milwaukee Division arrested a local man who plotted a mass shooting, according to a release by United States Attorney’s Office of Eastern District of Wisconsin.

On Tuesday, Samy Mohamed Hamzeh, 23, was charged with unlawfully possessing a machine gun and unlawfully receiving and possessing unregistered firearms. They say the FBI was tipped in September that Hamzeh had planned to travel to Israel to carry out an attack, but abandoned the plan as too difficult and later decided on a domestic attack.  FBI informants allegedly recorded Hamzeh planning an attack on a Milwaukee Masonic Temple.

According to the release, Hamzeh was hoping to escape with his life after killing at least "thirty people."

CBS 58 filmed Samy Hamzeh working out at 9Round Downtown Milwaukee, a gym where he had previously been employed.

He was fired last Tuesday after working there for just under 3 weeks.

CBS 58's Michael Schlesinger was at the gym learning about kickboxing for CBS 58's Morning News.

A company spokesperson confirmed the man in the film is Hamzeh.

9Round spokesman Mike Misetic said, "His [Hamzeh] last day of work at 9Round was on January 18th, and he was fired on the 19th."

Misetic says that's because people complained Hamzeh was too intense for the high-energy and fun 9round concept. He says franchise owner, Delia Luna, noticed the same issues with Hamzeh before firing him.

"Imagine having somebody screaming in your face to kick harder or punch harder, that's all great but that's not what 9Round is all about." Misetic said.

The building houses a Children's Dyslexia Center and a bar and restaurant, called the Double Eagle Pub.

Struble said, "That's one of the chilling things about this whole thing is that that dyslexic learning center is in there too. You think about somebody targeting that, that's why I said this is a sick mind."

According to the criminal complaint, Hamzeh targeted the club because he believed "they [Masons] are playing with the world like a game."