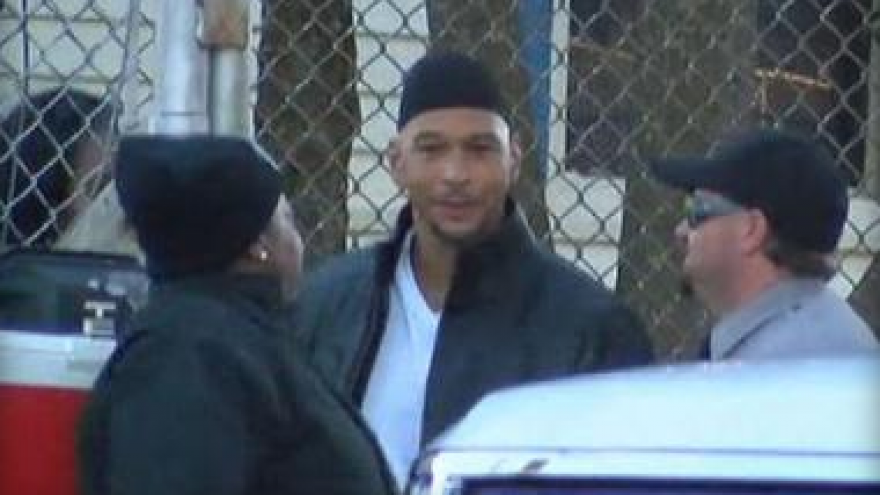 Rae Carruth is a free man. The former NFL wide receiver was released from prison Monday after serving more than 18 years for conspiring to murder the mother of his unborn child.

The Carolina Panthers' 1997 first-round draft pick was released from Sampson Correctional Institution in Clinton, North Carolina, after completing his sentence of 18 to 24 years.

Carruth did not speak to reporters as he left prison wearing a knit cap and an unzipped jacket on a chilly morning with temperatures in the high 30s. There was a smattering of applause when he got into a white SUV and was whisked away. He was taken to an undisclosed location.

The 44-year-old Carruth will be a on a ninth-month post-release program, according to North Carolina Department of Public Safety spokesman Jerry Higgins. He would need special permission from a case officer to leave the state or the country during that span but is free to go wherever he pleases after nine months.

Carruth was found guilty of orchestrating a plot to kill Cherica Adams on Nov. 16, 1999, in Charlotte, North Carolina, to avoid paying child support. Adams was shot four times while driving her car but managed to make a 911 call that helped implicate Carruth.

Adams fell into a coma and died less than a month later after the shooting.

The child she was carrying, Chancellor Lee Adams, was delivered by emergency cesarean section but suffers from permanent brain damage and cerebral palsy.

Carruth has never admitted guilt in Adams' murder, but in a complex 15-page letter to  CBS affiliate WBTV in Charlotte in February he wrote that "I feel responsible for everything that happened. And I just want (Saundra Adams) to know that truly I am sorry for everything."

Carruth also said he was seeking to develop a relationship with his 18-year-old son, who was born the night of the fatal shooting.

Last week, Carruth told WSOC-TV in Charlotte in a telephone interview, "I just truly want to be forgiven."

He went on to say he was "somewhat frightened" about his release, adding that "I'm nervous just about how I'll be received by the public. I still have to work. I still have to live. I have to exist out there and it just seems like there is so much hate and negativity toward me."

Carruth has repeatedly said he wants to have a relationship with his son, who remains in the custody of his grandmother, Saundra Adams, who has raised him since birth. Adams had previously said she would be there when Carruth got out of prison, but she was not present Monday.

Carruth's arrest on charges of conspiracy and attempted murder nine days after the shooting sent shockwaves throughout the Panthers organization.

The team released Carruth and the NFL suspended him indefinitely after he fled the Charlotte area after posting $3 million bail and was found by federal authorities hiding in the trunk of a car in Tennessee, about 500 miles from Charlotte.

Panthers center Frank Garcia played with Carruth for more than two seasons. He said players were stunned when they heard the news of Carruth's possible involvement in the murder, about 20 miles from the team's downtown stadium in the affluent section of South Charlotte.

"It would be like finding out the guy sitting in the cubicle next to you at work was arrested for murder," Garcia said. "You just don't always know people as well as you think you do."

Garcia said Carruth was a little shy, and mostly kept to himself. But he said Carruth had a passion for helping kids, including reading books to elementary school students.

It was a difficult time in Panthers history.

Some players were called out of football practice to testify at the trial. Those not involved would spend time huddling in the players' lounge watching the trial on Court TV.

"That is one time where you were actually hiding from the cameras," Garcia said. "You just wanted to stay low and not be involved. All along you're asking yourself, 'Did I miss any signs? How is somebody capable of this?'"

While in jail Carruth worked as a barber, making about $1 per hour, the Department of Public Safety said.

That's a far cry from the four-year, $3.7 million contract Carruth signed with the Panthers after being drafted - although he never collected all of that money since he was released in the third year of his deal.