"Everybody Lost Everything": Megabus Traveling to Milwaukee Catches Fire 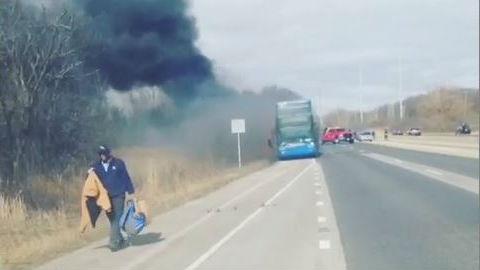 A Milwaukee-bound bus burst into flames North of Chicago Sunday afternoon, sending dozens of passengers running down the Highway.

Passengers tell CBS 58 the bus had just left Chicago heading north on Highway 41 when they heard a loud pop near one of the tires.

They say the driver then pulled over to the side of the road and got out to investigate. That's when they say smoke began pouring out of the side of the bus and all 40 passengers evacuated.

Less than five minutes later the bus was completely engulfed in flames,

"The bus went boom! And then boom again," says Russicha Watkins. "And you see the sparks and flames fly everywhere, and the bus driver did try to save our things with a little extinguisher but the flames were out of control.”

“Smoke was getting higher and higher, flames were all over the place, there were multiple explosions. it was pretty messy honestly," said Alec Grych.

In a statement to CBS 58 Megabus says, “Safety is our top priority, and Megabus.com is fully cooperating with the authorities with their investigation into the incident."

The passengers were placed on a separate bus which arrived in Milwaukee just before 4:00 PM.

Passengers say all of the luggage except one suitcase was completely destroyed.

"I have nothing left," says Miranda Medley. "Pretty much all my clothing, I don't really have anything else at home so there's nothing left for me."

Company policy says Megabus is only liable for a maximum of $250 for any lost or damaged luggage. CBS58 spoke with numerous passengers who say they had well over $1,000 in items destroyed.

"It's absolutely ridiculous," says Medley. "$200 isn't going to do anything for anyone."