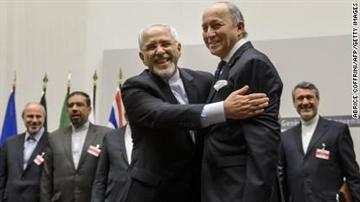 Geneva, Switzerland (CNN) -- The diplomatic gridlock between Iran and the West seemed immovable for decades. But on Sunday, diplomats made history when Iran and six world powers came together on an agreement over Iran's nuclear program.

The deal dials back Iran's ability to work toward a nuclear weapon and at the same time loosens the choke hold of international sanctions on Iran's economy.

The two sides now have six months to find out how historic the breakthrough really is. That's the duration of the preliminary agreement hammered out in Geneva, Switzerland, by Iran and the P5+1 -- the five permanent members of the U.N. Security Council plus Germany.

\"There are lots of things, regrettably, that we still have to work on. Our hope is that Iranian President Hassan Rouhani and Foreign Minister Javad Zarif want to build this different relationship, want to show in clear ways as we go forward that the program is peaceful,\" U.S. Secretary of State John Kerry told CNN's \"State of the Union.\"

The foreign policy chiefs from the nations making up the group traveled to Geneva from the United States, Britain, France, Russia, China and Germany on Saturday to pound out the last key points of the deal.

Iran has stumbled from one economic crisis to the next under the sanctions, and unemployment currently runs over 24%.

The breathing room is intended to buy Iran and the negotiating powers time to arrive at a more comprehensive agreement. But it represents an opportunity, not a guarantee.

\"It's a little too early to break open Champagne bottles and put on the party hats on this one,\" said Middle East diplomatic expert Aaron David Miller. Its success hinges on whether or not it leads to a bigger agreement to \"put Iran's nuclear weapons program to rest.\"

That the diplomats came to any accord at all represents a momentous budge in a nearly 35-year deadlock marked by distrust, suspicion and open animosity between the United States and Iran, which broke off diplomatic relations after Iran's revolution in 1979.

It was the first such agreement in 10 years of negotiation attempts over Iran's nuclear program.

\"What happened over the last several weeks is by any standard extraordinary,\" Miller said.

Kerry told CNN that it will be vital to verify Iran's compliance with the deal.

\"None of this is based on trust. It's not a question of trust,\" he said. \"It's a question of having the verification and the intrusive inspections and the insights into the program and the commitments that can be held accountable, so that you are in fact creating a fail-safe mechanism by which you are making your judgments.\"

Reactions to the breakthrough ran the gamut from joy in Iran to dismay in Israel.

In a televised speech, Rouhani sold it as a win for his negotiators.

\"We are pleased after 10 years that an agreement on this level has been reached,\" he said.

He played up the fact that the deal allows Iran to enrich uranium to a level making it usable as nuclear fuel. During the six months of the agreement, major facilities in Iran will continue doing so, he said. That level, 5% enrichment, is well below the level needed to make weapons.

The deal also marks the beginning of the end of sanctions, Rouhani said.

In the end, he said, Iran's insistence that it has never sought nuclear weapons will be vindicated, and that notion will go down as a \"historical joke.\"

Iran's Supreme Leader Ayatollah Ali Khamenei, traditionally very distrustful of Western powers, seemed pleased. This could be the basis of intelligent actions of the future, he said.

U.S. President Barack Obama took to live television to announce the deal as a success that includes \"substantial limitations that will help prevent Iran from creating a nuclear weapon.\"

Kerry has stressed that Iran will not be permitted to produce bomb-grade enriched uranium.

But decades of mistrust run deep.

Obama's Republican opponents in Washington scorned the deal, and key ally Israel frowned upon it.

Both say it will have the opposite effect, advancing Iran's alleged quest for a bomb.

\"This agreement shows other rogue states that wish to go nuclear that you can obfuscate, cheat, and lie for a decade, and eventually the United States will tire and drop key demands,\" said freshman Sen. Marco Rubio of Florida.

Rubio has been touted as a potential presidential hopeful in the 2016 elections.

For decades, he has listened to Iranian leaders threaten the Jewish state, one even saying Israel should be wiped off the map.

During the negotiations in Geneva, Khamenei responded to passionate Israeli skepticism by saying Israeli officials \"cannot be even called humans\" and referred to Netanyahu as \"the rabid dog of the region.\"

Now that sanctions are working, Netanyahu wants to see the thumbscrews tightened, not loosened, until Iran shuts down much of its nuclear capability, which Tehran claims it will only use for peaceful purposes.

The agreement does not apply to Israel, he said Sunday. If need be, Israel will take matters into its own hands, he said.

\"The regime in Iran is dedicated to destroying Israel, and Israel has the right and obligation to defend itself with its own forces against every threat. I want to make clear as the prime minister of Israel, Israel will not let Iran develop a nuclear military capability.\"

\"I would like to say to the Iranian people: You are not our enemies and we are not yours. There is a possibility to solve this issue diplomatically,\" Peres said.

He called on Iran to drop ambitions of acquiring a nuclear weapon and end support to terrorists threatening Israel.

Kerry thinks Israel became safer from an Iranian threat on Sunday than it was on Saturday, he told CNN's Candy Crowley.

\"Israel is threatened by what has been going on in Iran,\" he conceded. But it is better to have a chance to put Tehran's program in reverse than to let it secretly roll forward toward creating a nuclear bomb.

It's not about getting cozier with Iran, Kerry said.

In the weeks before the start of the negotiations, U.S. legislators appeared to be obliging Netanyahu, as they considered loading new sanctions onto the Islamic Republic.

If that happens, Obama may have to veto them, Kerry said. New sanctions would torpedo the deal.

But Kerry said he will assure Congress the deal supports its goal of preventing Iran from developing a nuclear weapon.

Obama has said that the agreement only involves some of the sanctions, leaving the toughest ones in place. The agreement is not about trusting Iran, it is about being able to verify the country's compliance, a White House official said.

If things go sour, all options are still on the table, Obama has said, including military strikes on Iran's nuclear facilities.

Obama understands how Israel in particular feels about Iran, a senior administration official said. \"You can be sure that President Obama will speak to Prime Minister Netanyahu\" on Sunday.

He may also need to have a conversation with Saudi Arabia, which has lasting tensions with Tehran and has been at odds with Obama over much of his Middle East policy.

The government expressed displeasure Sunday with the preliminary deal.

\"The Saudi government has been very concerned about these negotiations with Iran and unhappy at the prospect of a deal with Iran,\" a Saudi government official who is not authorized to speak to the media told CNN.

The White House and Zarif both insist that the agreement meets their expectations on the issue of uranium enrichment.

Iran has consistently said it is enriching uranium and building nuclear reactors only for peaceful civilian energy needs. Nuclear power plants use uranium that is enriched to 5%. It's the fuel that the plants use to generate electricity.

The White House has said enrichment may not go above that.

Iran must also dilute to below 5%, or convert to a form not suitable for further enrichment, its entire stockpile of near-20% enriched uranium before the end of the initial phase of the deal.

It may not turn on certain centrifuges, the devices used to enrich uranium, that have not yet been brought on line.

This is in line with the terms of the Treaty on the Non-Proliferation of Nuclear Weapons, which Iran has signed onto. It requires Tehran not to create nuclear weapons or enable other countries to obtain them.

Iran has also agreed to what Kerry described as \"unprecedented international monitoring\" of its nuclear program.

This final round of negotiations in Geneva stretched on for four days, but began months ago in secrecy, shortly after Rouhani replaced Mahmoud Ahmadinejad as Iran's president earlier this year.

Ahmadinejad's foreign policy rhetoric was marked by caustic jabs at the United States and bellicose threats toward Israel. He railed against economic sanctions and drove the advancement of nuclear technology.

Rouhani has struck a more conciliatory tone and made the lifting of sanctions against his country a priority.

The Americans briefed their P5+1 colleagues. It led to formal negotiations in Geneva.

Catherine Ashton, the European Union's foreign policy chief, led the working negotiations to their near conclusion.

Shortly after 3:00 a.m. local time Sunday, a tweet from a European diplomat let on that there was a deal. An hour later, an Iranian colleague followed suit.

A diplomatic mountain had been moved.