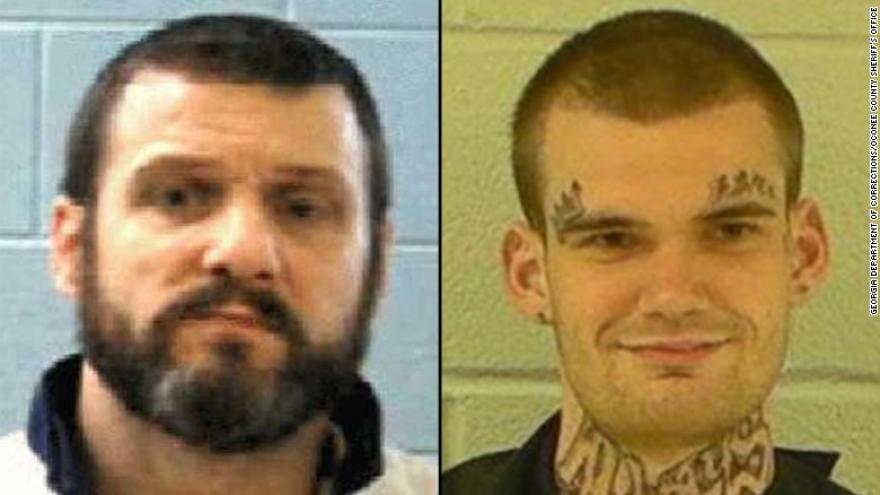 (CNN) Two Georgia inmates suspected of killing two corrections officers in an escape from a prisoner transport bus this week have been captured, the Georgia Bureau of Investigation tweeted Thursday.

Rowe and Dubose were on a state corrections bus with 31 other prisoners Tuesday morning when the two somehow got out of what should have been a locked, gated rear section of the bus, police said.

The men entered the driver's compartment, overpowered and disarmed Officers Christopher Monica and Curtis Billue while the bus was on State Route 16 between Eatonton and Sparta, police said.

At least one of the escapees shot and killed the officers, authorities said.

Monica, 42, a sergeant, worked for the department for almost eight years and leaves a wife. Billue, 58, a 10-year employee, is survived by his father, brother and sister, Georgia Department of Corrections Commissioner Greg Dozier said.

Rowe was serving a sentence of up to life in prison for armed robbery and aggravated assault in a 2001 case.

Dubose was sentenced to up to 20 years in prison for armed robbery, aggravated assault and theft in 2014. He also was convicted of theft and identity fraud in cases from August 2010.

The other prisoners on the bus Tuesday were taken to the Putnam County Sheriff's Office and put on another corrections department bus.