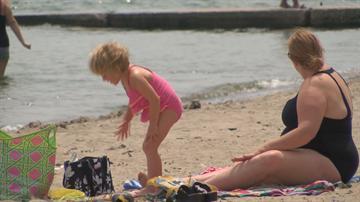 \"He's the type of child that has no fear, so you want to make sure he's smart and safe,\" Crain said.

Crain used to be a lifeguard and is already teaching Wyatt how to swim.  She says recent stories of people drowning in area lakes and rivers upset her.

\"As easily as it can happen, it is your responsibility as the parent to make sure you're watching your child and  making sure you're doing everything you can to keep them safe,\" Crain said.

Crain's concerns are for good reason.  Rescue squads tell CBS-58, drowning is the number two cause of death in children under 14.

Mayer's crews respond to plenty of water rescue calls this time of year -- saving both children and adults.

\"Adults probably have that false sense of security whereas children just aren't aware of the dangers they're  facing,\" Mayer said.

Captain Mayer says Wisconsin lakes and river depths can be deceiving because the water is usually murky.  When someone disappears under the water, it's important to use landmarks to remember where they were.

\"Even if you have two witnesses who are standing right next to each other, they can often times point you in different directions,\"Mayer said.

Mayer wants parents to teach children to ask permission before going in water.  He says to always bring life jackets  and, thought it's tempting to leave electronics home away from the water, a cell phone to call for help.

\"Seconds can really mean the difference,\" Mayer said.  \"If you can't find a child, check in the water first.\"