Elkhorn Teen With a Big Heart: Fundraises for Four Years for K-9 Officers 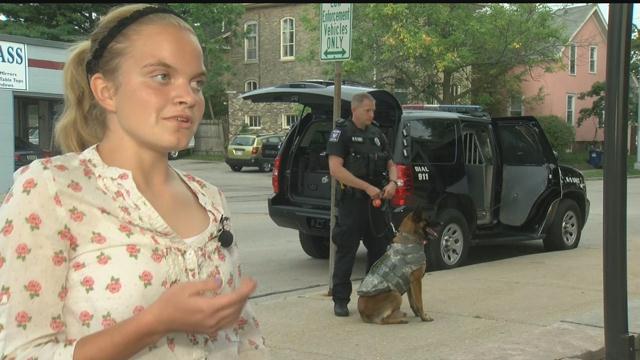 When she was in just 4th grade, Maddie Kleist saw a poster for Wisconsin Vest-A-Dog, a group that gets protective vests for police K-9's. She knew she wanted to donate and four years later, her dream was realized.

"Like officers say, 'I want to get home every night and see my family.' That's what I wanted for this dog too," said Maddie.

This dog is K-9 Titan, now proudly wearing a K-9 protective vest thanks to Maddie.

His handler, Officer Dave Arvai says its an integral part of Titan's safety, as the K-9 team is usually called in when criminals wont give up.

"If they've got a weapon, a gun, this is going to protect them.It gives us a little more confidence going into these situations," he said.

The vests are costly; this one was one-thousand dollars. The bill? Paid for by this Elkhorn 8th grader.

It took four years of saving and very little spending.

Its the second vest for Titan with a tie to this family, as dad Jeff's school paid for the last one. Titan and Officer Arvai are blown away.

"For her to be thinking of someone else, an animal...That's amazing," he said.

But Maddie wants no recognition; she's just happy knowing that tonight, one more K-9 is safe.

And Maddie is not done yet. She's continuing to fundraise for another K-9 vest and has  already raised $300.