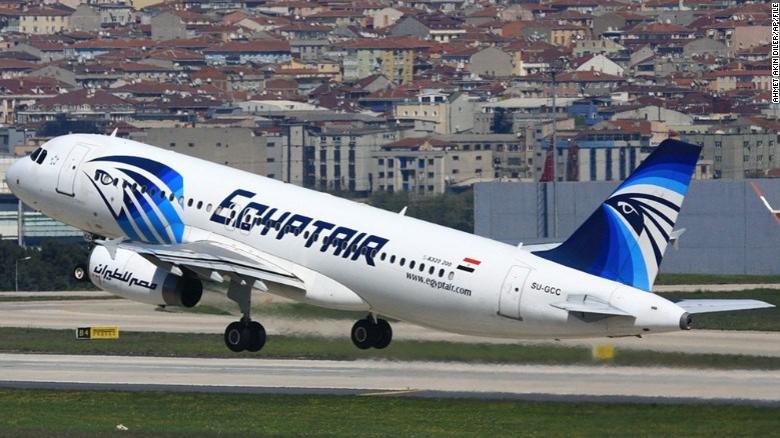 (CNN)Egyptian forces found wreckage from an EgyptAir flight that crashed in the Mediterranean with 66 people aboard, the military said.

Parts of the aircraft and passenger belongings were discovered Friday near the coastal city of Alexandria, the Egyptian military said in a statement.

It disappeared from radar early Thursday as it flew to Cairo -- what should have been about a 3½-hour flight.

The military said the wreckage was 180 miles (290 kilometers) north of the coastal city of Alexandria.A day earlier, the airline's vice chairman said wreckage of the plane had been found at sea, but those reports turned out to be false.

When searchers got close to the debris, they realized it was not from the missing airliner, Ahmed Adel said Thursday.

Hours after Adel retracted his statement Thursday, the military announced the sighting of the wreckage Friday.

"The presidency, with utmost sadness and regret, mourns the victims on aboard the EgyptAir flight who were killed after the plane crashed in the Mediterranean," the Egyptian presidency said in a statement.

The airline also expressed its condolences.

"EgyptAir sincerely conveys its deepest sorrow to the families and friends of the passengers onboard Flight MS804," it tweeted.While no theory has been completely ruled out, speculation on what caused the flight to crash centered on the possibility of a terror attack.

At some point before dropping off radar, the plane swerved 90 degrees to the left and then made a 360-degree turn to the right before plunging first to 15,000 feet, then 10,000 feet, Greek officials said.

"It's very difficult to come up with a scenario that jibes with some sort of catastrophic failure. (The evidence so far) leads us down the road to a deliberate act," said Miles O'Brien, a CNN aviation analyst.Egyptian officials pointed to technical failures and terror as possible explanations.

"But if you analyze this situation properly, the possibility of having a different action aboard, of having a terror attack, is higher than having a technical problem," said Sharif Fathi, the nation's aviation minister.

"All assumptions are reviewed but none is favored," Foreign Minister Jean-Marc Ayrault told France 2 network Friday. "We have absolutely no indication on the causes of this event."Greece, France, the United States and other nations were searching about 130 nautical miles southeast of Karpathos, Greek aviation officials said.

As crews searched, somber relatives gathered in Cairo and Paris airports, seeking word on their loved ones.