Edward Snowden's ready to go to prison, waiting on answer from U.S. 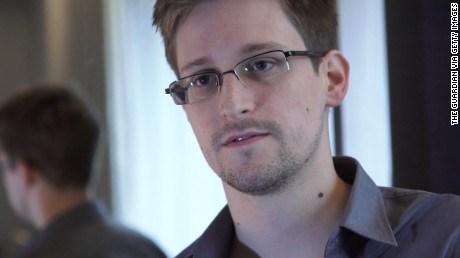 (CNN)Edward Snowden says he's offered "many times" to go to prison in the United States as part of a deal to return from exile in Russia but is still waiting for an answer from the American government.

The former National Security Agency contractor who leaked documents about top secret mass surveillance programs told the BBC in an interview he would be willing to reach a plea bargain with U.S. authorities.

"I've volunteered to go to prison with the government many times. What I won't do is I won't serve as a deterrent to people trying to do the right thing in difficult situations," Snowden said in the interview in Moscow, where he took refuge two years ago after his revelations about the scale of the NSA's snooping activities sent shock waves around the globe.

"So far, they've said they won't torture me, which is a start, I think, but we haven't gotten much further than that," he said.

Asked whether he and his lawyers were actively discussing a deal with the government, Snowden replied, "We're still waiting for them to call us back."

U.S. authorities have long said they would be open to a plea deal with him, but finding common ground between the two sides appears challenging. Snowden didn't say how long he had proposed to spend in prison.Former Attorney General Eric Holder generated headlines in July when he told Yahoo News that the "possibility exists" for the Justice Department to cut a deal that would allow Snowden to return to the United States.

Holder, who left office in April, also said Snowden's disclosures "spurred a necessary debate" about the program to collect in bulk phone records on tens of millions of Americans. That program was curtailed in June when Congress passed a law requiring the U.S. government to obtain a warrant in order to get phone metadata from telecommunications companies.

But following Holder's comments, the Justice Department said that its stance on the matter hadn't changed and that Snowden would face criminal prosecution were he to return to the United States.

Later in July, the White House rejected a petition that had gathered more than 167,000 signatures calling for President Obama to pardon Snowden, who has been charged with three felony counts, including violations of the U.S. Espionage Act.Snowden told the BBC he didn't think the charges were fair.

"The Espionage Act finds anyone guilty who provides any information to the public, regardless of whether it is right or wrong," he said. "You aren't even allowed to explain to a jury what your motivations were for revealing this information. It is simply a question of 'did you reveal information?' If yes, you go to prison for the rest of your life."

He said he doesn't regret his decision to bring the hidden surveillance programs to light.

"I regret I didn't come forward sooner, because the longer you wait with programs like this, the more deeply entrenched they become," Snowden said. "I have paid a price but I feel comfortable with the decisions that I have made. If I'm gone tomorrow, I'm happy with what I had. I feel blessed."