Ebola: What you need to know 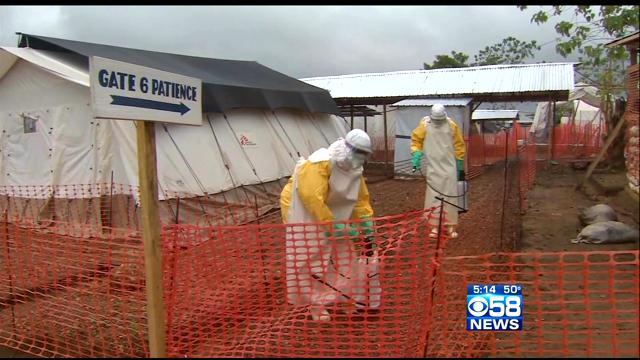 Here's some background information about Ebola, a virus with a high fatality rate that was first identified in Africa in 1976.

Facts:
Ebola hemorrhagic fever is a disease caused by one of five different Ebola viruses. Four of the strains can cause severe illness in humans and animals. The fifth, Reston virus, has caused illness in some animals, but not in humans.

The first human outbreaks occurred in 1976, one in northern Zaire (now Democratic Republic of the Congo) in Central Africa: and the other, in southern Sudan (now South Sudan). The virus is named after the Ebola River, where the virus was first recognized in 1976, according to the Centers for Disease Control and Prevention.

Ebola is extremely infectious but not extremely contagious. It is infectious, because an infinitesimally small amount can cause illness. Laboratory experiments on nonhuman primates suggest that even a single virus may be enough to trigger a fatal infection.

Instead, Ebola could be considered moderately contagious, because the virus is not transmitted through the air. The most contagious diseases, such as measles or influenza, virus particles are airborne.

Humans can be infected by other humans if they come in contact with body fluids from an infected person or contaminated objects from infected persons. Humans can also be exposed to the virus, for example, by butchering infected animals.

While the exact reservoir of Ebola viruses is still unknown, researchers believe the most likely natural hosts are fruit bats.

Typically, symptoms appear 8-10 days after exposure to the virus, but the incubation period can span two to 21 days.

Unprotected health care workers are susceptible to infection because of their close contact with patients during treatment.

Ebola is not transmissible if someone is asymptomatic or once someone has recovered from it. However, the virus has been found in semen for up to three months.

According to the World Health Organization, \"there is no specific treatment or vaccine,\" and the fatality rate can be up to 90%. Patients are given supportive care, which includes providing fluids and electrolytes and food.

March 25, 2014 - The CDC issues its initial announcement on an outbreak in Guinea, and reports of cases in Liberia and Sierra Leone. \"In Guinea, a total of 86 suspected cases, including 59 deaths (case fatality ratio: 68.5%), had been reported as of March 24, 2014. Preliminary results from the Pasteur Institute in Lyon, France suggest Zaire ebolavirus as the causative agent.\"

April 16, 2014 - The New England Journal of Medicine publishes a report, speculating that the current outbreak's Patient Zero was a two-year-old from Guinea. The child died on December 6, 2013, followed by his mother, sister and grandmother over the next month.

July 2014 - Patrick Sawyer, a top government official in the Liberian Ministry of Finance, dies at a local Nigerian hospital. He is the first American to die in what officials are calling \"deadliest Ebola outbreak in history.\"

July 2014 - Nancy Writebol, an American aid worker in Liberia, tests positive for Ebola. According to Samaritan's Purse, Writebol is infected while treating Ebola patients in Liberia.

July 29, 2014 - According to Doctors Without Borders, Dr. Sheik Humarr Khan who was overseeing Ebola treatment at Kenema Government Hospital in Sierra Leone dies from complications of the disease.

July 30, 2014 - The Peace Corps announces it is removing its volunteers from Liberia, Sierra Leone and Guinea.

August 2, 2014 - A specially equipped medical plane carrying Ebola patient Dr. Kent Brantly lands at Dobbins Air Reserve Base in Marietta, Georgia. He is then driven by ambulance to Emory University Hospital in Atlanta.

August 4, 2014 - CNN reports that three top secret, experimental vials of the drug, \"ZMapp,\" were flown into Liberia last week in a last-ditch effort to save Brantly and Writebol, according to a source familiar with details of the treatment. Doctors report \"significant improvement.\"

August 6, 2014 - Nancy Writebol arrives at Emory in Atlanta for treatment.

August 8, 2014 - Experts at the World Health Organization declare the Ebola epidemic ravaging West Africa an international health emergency that requires a coordinated global approach, describing it as the worst outbreak in the four-decade history of tracking the disease.

August 19, 2014 - Liberia's President Ellen Johnson Sirleaf declares a nationwide curfew beginning August 20 and orders two communities to be completely quarantined, with no movement in or out of the areas.

August 21, 2014 - Dr. Kent Brantly is discharged from Emory University Hospital. It is also announced that Nancy Writebol had been released on Tuesday, August 19. The releases come after Emory staff are confident Brantly and Writebol pose \"no public health threat.\"

September 6, 2014 - The government of Sierra Leone announces plans for a nationwide lockdown from September 19-21, in order to stop the spread of Ebola. The lockdown is being billed as a predominantly social campaign rather than a medical one, in which volunteers will go door-to-door to talk to people.

September 16, 2014 - President Barack Obama calls the efforts to combat the Ebola outbreak centered in West Africa \"the largest international response in the history of the CDC.\" Speaking from the CDC headquarters in Atlanta, Obama adds that \"faced with this outbreak, the world is looking to\" the United States to lead international efforts to combat the virus. He says the United States is ready to take on that leadership role.

September 30, 2014 - Dr. Thomas Frieden, director of the CDC, announces the first diagnosed case of Ebola in the United States. The person has been hospitalized and isolated at Texas Health Presbyterian Hospital in Dallas, Texas, since September 28.

October 6, 2014 - A nurse's assistant in Spain becomes the first person known to have contracted Ebola outside Africa in the current outbreak. The woman helped treat two Spanish missionaries, both of whom had contracted Ebola in West Africa, one in Liberia and the other in Sierra Leone. Both died after returning to Spain.

1976 - First recognition of the EBOV disease is in Zaire (now Democratic Republic of the Congo). The outbreak has 318 reported human cases, leading to 280 deaths. An SUDV outbreak also occurs in Sudan (now South Sudan), which incurs 284 cases and 151 deaths.

1989 - In Reston, Virginia, macaque monkeys imported from the Philippines are found to be infected with the Ebola virus (later named the Ebola-Reston virus).

1990 - In Texas and Virginia quarantine facilities, four humans develop Ebola antibodies after contact with monkeys imported from the Philippines. None of the humans has symptoms.

1995 - An outbreak in Democratic Republic of the Congo (formerly Zaire) leads to 315 reported cases and at least 250 deaths.

November 2008 - The Ebola-Reston virus (RESTV) is detected in five humans in the Philippines. They are workers on a pig farm and slaughterhouse and suffer no symptoms. This is the first known occurrence of the Reston virus in pigs.

August 26, 2014 - The Ministry of Health in the Democratic Republic of the Congo notifies the World Health Organization of an Ebola outbreak in the country. It is the seventh outbreak in the country since 1976, when the virus was first identified near the Ebola river. The outbreak is not related to the ongoing outbreak in Guinea, Liberia, Nigeria and Sierra Leone. As of September 24, 70 cases and 42 deaths have been reported in the Democratic Republic of the Congo.