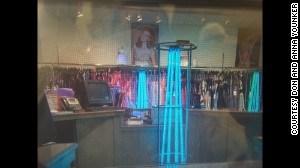 (CNN) -- For Anna Younker, owning a bridal shop means serving customers who are planning one of the happiest days of their lives. It's a job she loves.

\"She's the salt of the earth,\" said her husband, Donald.

But since October 16, the couple's lives have been turned upside down. Ever since news broke that nurse Amber Vinson had visited their Ohio store just before being diagnosed with Ebola, the fallout has been unrelenting.

The couple's Coming Attractions Bridal Shop, a business they cultivated for nearly 25 years, is dark, they say, mainly thanks to Ebola hysteria.

\"It's a little hard to believe that something like Ebola from halfway around the world can affect our lives right here in Akron,\" said Donald Younker. \"The world is clearly smaller than we think.\"

On Sunday, the bridal shop looked like a \"Star Trek\" set. Bright blue light beamed from five ultraviolet ray machines in an operation designed to eliminate any possible trace of the Ebola virus. It's called a TORCH UV system from New Jersey-based ClorDiSys Solutions Inc. The Younkers say a team spent about five hours performing the service free of charge.

\"You don't have to do it if you don't want to, that's what they told us,\" Anna Younker said.

\"It was the same thing they told us about closing,\" Younker added.

'I'm hoping that this will ease everybody's mind'

The couple say they did it because of \"public scrutiny.\"

\"I'm hoping that this will ease everybody's mind that if there's anything floating in my store that it's gonna be gone,' Anna Younker said.

The couple say that by shutting their doors and scrubbing the shop, they hope to \"get rid of any\" stigmatization.

Despite their efforts, the Younkers worry they may have to get rid of their entire inventory, including hundreds of dresses.

\"I think that's probably what I'll have to do,\" Donald Younker said.

For now, their insurance company is suggesting they may not be covered, saying a virus such as Ebola may be an exclusion.

Yet, the Younkers say, there's no evidence the virus was in the shop.

He's also worried about possible lawsuits from customers. He isn't sure why. Yet he says nothing would surprise him.

It's unexpected craziness,\" said his wife, Anna. \"Some people are going over and beyond to panic.\"

Anna Younker is listed as a \"contact\" with Vinson because she waited on her in the bridal shop. The Health Department told her that for three days, she wasn't allowed to leave her home.

Now, the restrictions have been loosened. She can leave her house but cannot use public transportation and must tell officials if she wants to leave the county. Someone still comes to her home to record her temperature once a day. Her 21-day oversight will last about two more weeks before it can be lifted.

But even though her husband, who works at IBM, and their 10-year-old son have no official restrictions, they're also affected.

When she first found out about Vinson, Younker called her son's school principal to let her know. \"I wanted to make sure she was comfortable that my son was at school, and she was,\" Younker said.

Then, as news spread, the school closed as a precaution to get scrubbed down. The principal told her that parents were calling with concerns. \"They asked me what can I do,\" Younker said. \"They weren't telling me I cannot send my son to school but ... I did choose to keep him home just so all the parents, teachers, families are not panicking.\"

And while Younker says she's been getting a lot of support from a diocese and friends, there are others who don't want her son there, for now.

\"I don't want my son to be treated as if he's full of germs. ... There've been some parents that said if this particular child would come to school that's associated with this Ebola ... they will not send their kids to school.\"

\"I don't want to disrupt everybody else's learning. I want everybody to go to school and feel comfortable.\"

His parents are picking up his homework so he doesn't fall behind.

Meantime, questions keep coming. Some of them, the couple says, are baseless, according to what health officials are telling them.

\"A lot of it is just nonsense. ... Did I use the same tape measure, measuring those bridesmaids as I used on their bridesmaids? ... That's not how this disease is caught,\" Anna Younker said.

For now, from both a personal and business standpoint, the couple are counting the days when they can get everything back to normal.

\"Even though I feel good, we have to be cautious,\" she said.

\"No one will be out of their dresses.\"