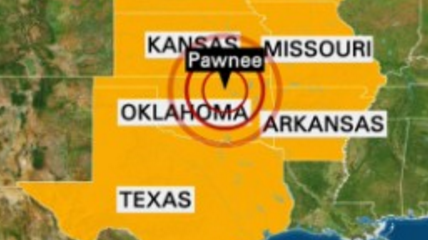 (CNN) A 5.6 magnitude earthquake struck on Saturday morning near Pawnee, Oklahoma, rattling at least seven states across the U.S. heartland, according to the U.S. Geological Survey.

The earthquake was felt in Oklahoma, Kansas, Arkansas, Missouri, Texas, Nebraska, and Iowa, according to USGS geophysicists.

Despite the light damage from the sizable quake, the shakeup did set off alarm bells on social media.

"A quake this size would shake for about 15 seconds and it was a shallow quake, about 7 kilometers (4.35 miles) deep," said Randy Baldwin, a USGS geophysicist.

There is no clear evidence of major damage from the earthquake, Pawnee, Oklahoma Chamber of Commerce manager Tom Briggs tells CNN.

With earthquakes in the central and eastern United States, "the ground is softer, so the seismic waves have a much farther travel distance then an earthquake in California or Nevada," said Robert Sanders, USGS geophysicist.

"We had some buildings, some of the older structures, delaminate. The fire department and electricians and police are going through the area," Briggs said.

This is the biggest quake to hit the state since the November 2011, said Keli Cain, a spokeswoman for the Oklahoma Department of Emergency Management.