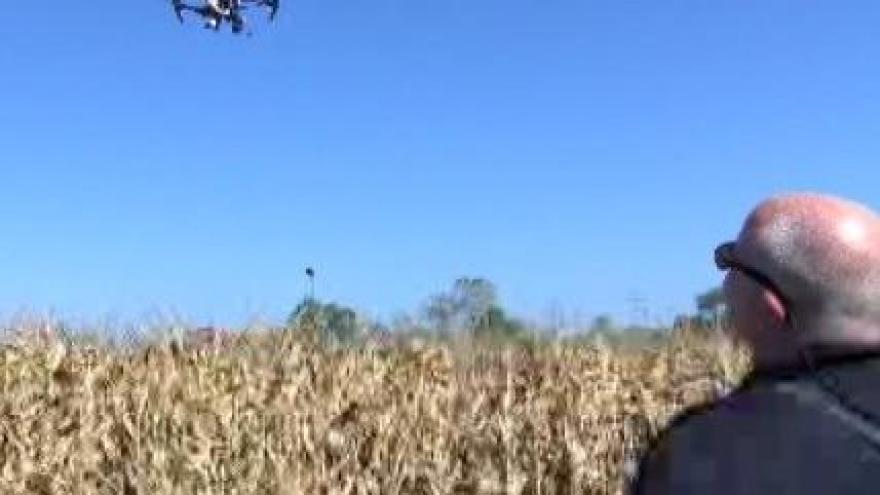 While authorities continue to scour remote areas for Kenosha County murder suspect Andrew Obregon a local man is offering up the help of his drone to try and  make the search a little easier.
Every time authorities have cornered Obregon he's managed to outrun them and disappear In a cornfield. Something Adam Andrews of Aeroworx Productions said wouldn't be possible if a drone was involved.

"They're faster, run wider, are safer and cheaper than manned aircraft," Andrews said.
He said drones can see a suspect hiding in a cornfield.
"We can fly literally a foot over the cornstalks and not disturb any of the vegetation or really bother anybody either," Andrews said.
During two pursuits, Obregon has lost authorities by ducking into a cornfield which doesn't surprise Andrews.
"If we were to walk 5 to 6 feet into this cornfield we'd disappear," Andrews said.
Andrews said a ground search in these cornstalks is more dangerous than the public realizes.
"It becomes a safety factor. People don't realize k-9's can cost a Dept $30,000 to $50,000 and they don't want to throw them or an officer into harms way," Andrews said.
Which is why he's offering up his drone.
"We fly low and slow, go back and forth and take pictures and video and if we don't see it live we can go back and examine the images on an hd monitor," Andrews said.
Quieter and cheaper than a helicopter, he said.
"It's like a dollar an hour vs $1,500 an hour," Andrews said.
But just as high tech, able to use thermal imaging at night
"It knows the difference between the temp of a cornstalk and a human. The human shows up as a brighter color. They'll pop out like a sore thumb," Andrews said.
Andrews is offering his service free to law enforcement, because like the rest of his community, he wants Obregon safely caught.
"Worst case scenario somebody does something to the drone and were out a few thousand dollars...but not an officer or K-9's life," he said.

Law enforcement have used a helicopter to search for Obregon but have had no luck.
Andrews said he's willing to offer his services to find Obregon for free.