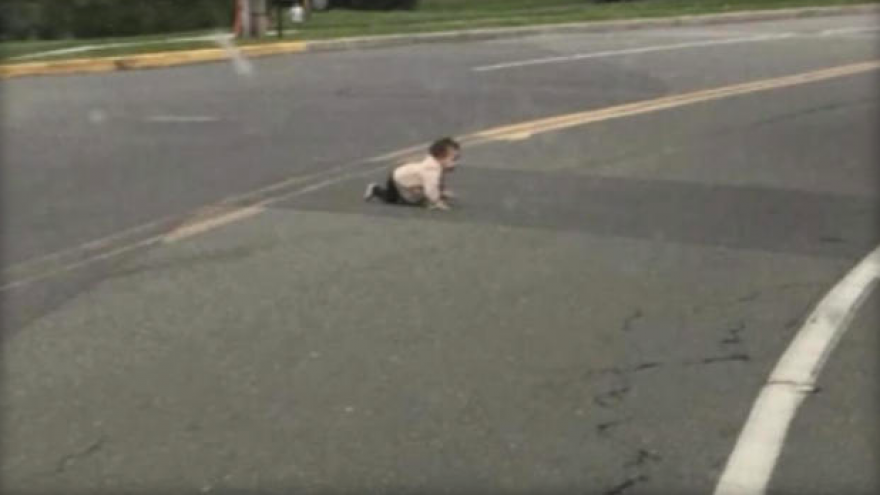 A man saw an unattended baby crawling across a street in Lakewood, New Jersey, on Friday and he snapped two photos of the outrageous sight before getting out of his car to help, he wrote in a Facebook post that has since been deleted.

Cory Black Cannon was driving on Joe Parker Road when he spotted the baby girl crawling across the asphalt road. "Parenting at its absolute worse," he wrote in the Facebook post, which included two photos of the baby crawling in the middle of a multi-lane street. "I thought about my baby girl," Cannon wrote. The post went viral and received over 2,000 shares, but Cannon deleted it on Monday.

Cannon said he and another driver stopped to block traffic, and got out of his car to help, CBS New York station WCBS reports. "I wasn't actually sure what it was or what was going on, but once I saw the baby move, just, my heart stopped, and I knew I had to do something," Cannon told WCBS. "Hopefully I did the right thing."

Cannon, who has a 4-month-old daughter, said he started yelling for neighbors who were outside to come and help. "Someone actually came over, picked the child up, said it wasn't her child," he said. "So we walked her over to the adjacent house, knocked on the door, the door was wide open. A toddler came and answered the door initially. Then the adult came. We explained to him what was going on and gave him his daughter back."

"Hopefully it doesn't happen again," Cannon said. "It was like a shock to the system. You have to be more aware of your surroundings and be able to pay a little more attention to your children. That's basically what it comes down to."

Authorities say the baby girl was unharmed. The New Jersey Division of Child Protection and Permanency is assisting in the investigation, according to WCBS.