DREAMer Speaks Out on Immigration, Gets Arrested by ICE 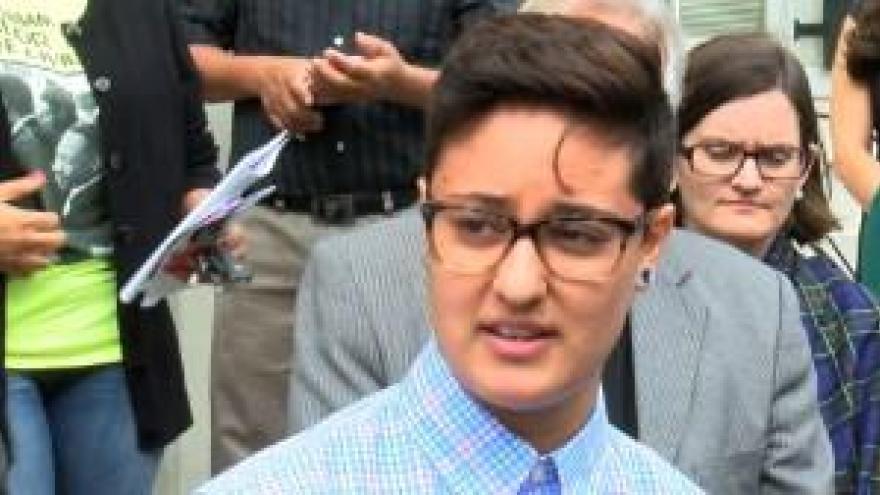 (CNN) She spoke out on behalf of young undocumented immigrants like herself who want legal status. Now she's in the custody of US Immigration and Customs Enforcement.

Daniela Vargas, 22, was arrested Wednesday after sharing her family's story -- including her father and brother's arrest last month by ICE officers -- during a news conference in Jackson, Mississippi.

Moments before her arrest by ICE, Vargas had advocated for young people who, like herself, were brought to the US illegally as children, then qualified for a temporary reprieve from deportation under the Obama-era Deferred Action for Childhood Arrivals program, known as DACA. Recipients often are called DREAMers, a reference to the DREAM Act, which if approved by Congress would give DACA participants permanent legal status.

"The path to citizenship is necessary for DACA recipients but also for the other 11 million undocumented people with dreams," Vargas told reporters. "Today, my father and brother await deportation, while I continue to fight this battle as a DREAMer to help contribute to this country, which I feel that is very much my country."

President Donald Trump has identified DACA as an exception to sweeping new orders mandating aggressive enforcement of immigration laws. But new rules issued by the Department of Homeland Security make clear that no undocumented immigrants will be exempt from deportation proceedings.

Vargas said she arrived in the United States with her family at age 7 as an undocumented immigrant from Argentina and later was granted DACA status, which lasts two years.

Her attorney, Abby Peterson, said Vargas' DACA status expired in November. She could not immediately afford the minimum $495 renewal application fee, Peterson said, and put off the process until last month. The government recommends DACA recipients apply for a renewal between 150 and 120 days before their status expires.

Days after she reapplied, her father and brother on February 15 were taken into ICE custody at their home. Bill Chandler, executive director of the Mississippi Immigrants Rights Alliance, said he was among immigrant advocates at the scene.

"We stood vigil outside of the house for about five hours," Chandler said. "ICE was trying to persuade Daniela to come out of the house. Of course, she refused. They went and got a search warrant. ... Then they decided to break into the house and confront her."

"She was terrified, locked in a closet, ICE pounding on her door, asking what she was supposed to do," a friend, Angela Stuesse, said. "And I was also terrified. and that went on for hours."

Vargas convinced the agents she was "a DACA person," Chandler said. "But they threatened her and said they're going to come back and get her."

Even so, Vargas, who aspires to be a university math teacher, wanted to speak out this week about recent ICE raids, Stuesse said.

"She thought sharing her story might help people," she said.

But shortly after Vargas left the news conference, she encountered federal officers.

"Just after she spoke, ICE agents retaliated," said Greisa Martinez Rosas, advocacy director for United We Dream, on a conference call Thursday with reporters. "ICE agents tracked her down and knocked on her window. And what we know they said is, 'You know who we are, you know why we're here.'

"Because her DACA was expired, ICE agents played a game of gotcha with her life," Martinez said

'She pays her taxes'

Vargas appreciates the opportunities afforded her in America, her lawyer said.

"Like so many immigrants, she doesn't take this country for granted," Peterson said. "She has pursued an education, she works hard, she pays her taxes. She is a very deserving individual."

Stuesse, who has known Vargas since she arrived in Mississippi 15 years ago, described her as "a great kid."

"She was a member of the band; she plays the trombone," Stuesse said. "She got a scholarship to keep going to band for community college but couldn't pay for the rest of the expenses."

Peterson said she has not yet spoken with Vargas but will represent her with federal authorities.