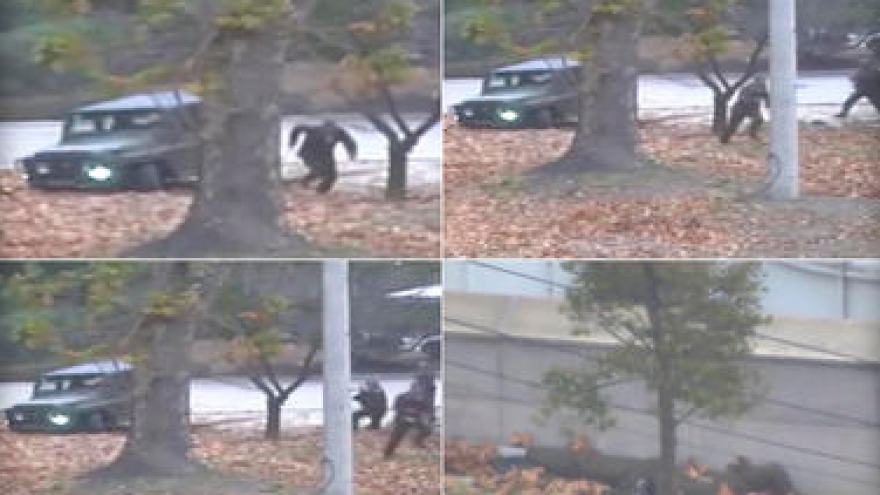 Doctors in South Korea say a wounded North Korean soldier whose dramatic defection was caught on video is now conscious.

You can watch the full video of the escape at CBS News.

This is the first time in a decade that a North Korean soldier has defected by crossing the heavily armed border with the South, and his escape looked like a scene right out of a Hollywood movie, reports CBS News correspondent Ben Tracy.

The extraordinary video begins with an Army Jeep racing down an empty road inside the demilitarized zone between North and South Korea. North Korean soldiers, aware something is wrong, run from their checkpoints and begin to chase their fleeing comrade.

The defector's truck gets stuck and he then literally runs for his life. The other soldiers follow and open fire, shooting at him approximately 40 times. The defector was racing to cross the military demarcation line, the official boundary between the two countries inside the DMZ.

The U.N. Command said North Korea's army violated the 1953 Korean War Armistice in their pursuit of the fleeing soldier.

"The KPA violated the armistice agreement by one, firing weapons across the MDL and two, by actually crossing the MDL temporarily," U.N. Command spokesperson Chad Carroll said.

You can see the North Korean soldier briefly crosses the line and then hurries back. A heat-seeking video then shows South Korean soldiers dragging the lifeless body of the defector to safety.

He was flown by helicopter to a South Korean hospital where doctors removed at least five bullets from his body. Doctors said they also found dozens of parasites in his body, which gives a sense of how bad conditions are in North Korea. Since he woke up in the hospital, the 24-year-old soldier has been riveted by action movies and American TV shows including CSI.