Dozens of Headstones Damaged at Jewish Cemetery in Philadelphia 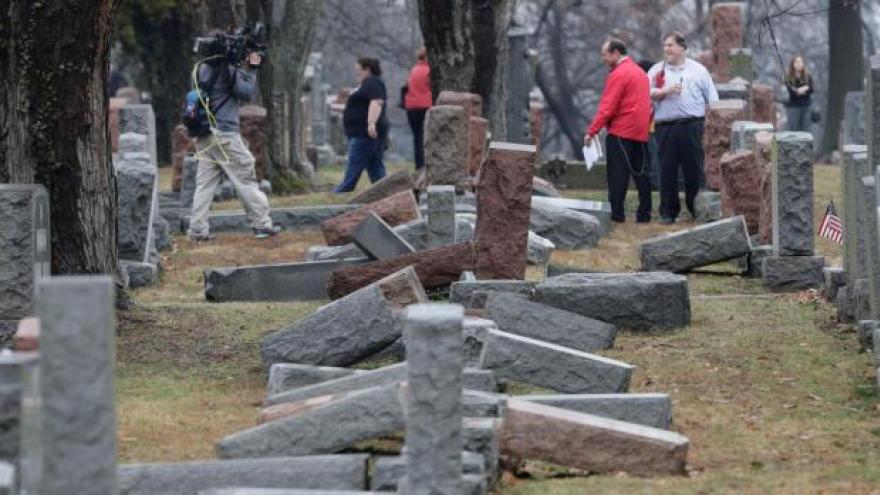 (CBS NEWS) PHILADELPHIA -- Police say scores of headstones have been vandalized at a Jewish cemetery in northeast Philadelphia.

A police spokeswoman said preliminary estimates are that 75 to 100 graves were damaged at Mount Carmel Cemetery in the Wissinoming section of the city.

The Jewish Federation of Greater Philadelphia lists Mount Carmel as a Jewish cemetery in northeast Philadelphia.

“We must find those responsible and hold accountable,” he tweeted.

The organization called on President Donald Trump to deliver a speech about his intentions to combat forms of hate, including anti-Semitism and Islamophobia.

Jewish graves in Philadelphia now vandalized. Stop this incubator of #Antisemitism and other hate. WE BEG YOU @POTUS @realDonaldTrump pic.twitter.com/RHuIjdE2Yg

As CBS Philly reports, the incident comes less than two weeks after another cemetery, the Holy Redeemer Cemetery in the city’s Bridesburg neighborhood, was vandalized. A man walking his dog found more than 30 tombstones knocked over.

Police have not drawn any connection between the two incidents.

The damage also comes less than a week after a Jewish cemetery in suburban St. Louis reported that more than 150 headstones were vandalized, many of them tipped over.