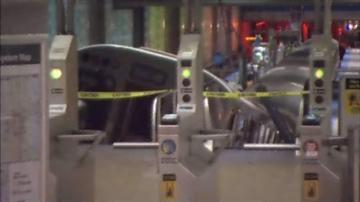 A tweet from the Chicago Transit Authority at 1 a.m. announced the derailment.

Preliminary reports say the train failed to stop, jumped the platform and hit an escalator.

According to the Chicago Fire Department, those injured were taken to four area hospitals and all of the injuries appear to be non-life threatening.

The train's operator had no health issues and was able to walk and speak to authorities.

It's unclear what caused the derailment and the NTSB has been notified.

During a press conference, Brian Steele with the Chicago Transit Authority said there was no immediate indication of equipment issues and the train was traveling at a higher rate of speed than normal, according to CBS Chicago affiliate WBBM.

Later tweets from CTA told travelers that the Blue Line is temporarily suspended between O'Hare and Rosemont and that bus shuttles are available in the affected area.

There's no word on when normal service will resume.