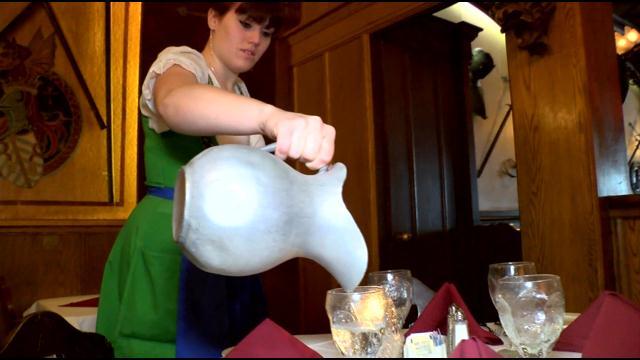 You could call Mader's German restaurant the great grandfather of Milwaukee dining.

Since 1902, people have filled the rustic building on Old World Third Street looking for old world favorites. But a new $500 million Bucks arena and additional $500 million in hotels, dining, shopping, housing and entertainment developments going up right around the corner? Mader's can't wait.

Mader's needed to build a bigger and better bar after the Bradley Center was built in the late 1980's to supply bigger crowds. Hazard says they're ready for and welcome any future changes, having already adapted their bar menu to a sports crowd.

Just up the street at Ugly's Pub, general manager Lawrence Starks is still thinking about those arena drawings the Bucks revealed Wednesday morning.

\"Honestly, a little bit better [than I was expecting],\" Starks said. \"It's breathtaking.\"

Starks' bosses made the entire staff watch the arena design press conference. He says competition from new bars built around the arena will only make Ugly's product stronger.

\"Anybody else on this block that comes around, we want to drive everybody to Third Street, that's our goal,\" Starks said.

\"With the demand generators [like the arena project] will come the need for the supply,\" Marcus said. \"Hotels are simply supply. They are a reaction to people being downtown.\"

To Marcus, an entertainment complex just a five-minute walk from his hotel looks like an investment the city needs to see through.

\"We need to make sure we take care of the crown jewels that we have and this is just one of them,\" Marcus said.

CBS-58 News asked Marcus if he has any plans in becoming a corporate sponsor for the arena project or if he wants to join in the ancillary business developments. Marcus says he's had meetings with the Bucks, but not about anything specific to do with the arena. He says he'd be willing to listen to what the team has planned, but that we would have to wait and see.