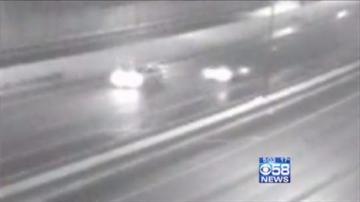 MILWAUKEE-New video was released Monday showing a woman going the wrong way on I-43 for six miles early Saturday morning.

The video shows the vantage point from the Department of Transportation cameras and shows several close call with innocent motorists going the right way. Among the driver's close encounters, one with a Milwaukee County Sheriff's Deputy.

Eventually the deputy got her to stop. There were no crashes or injuries.

Arresting officers say she admitted to having four beers and claims to have been following GPS directions when she got lost.

She was heard on dash board camera telling deputies this  was her first arrest for alleged drunken driving. She's also facing a charge of recklessly endangering safety.