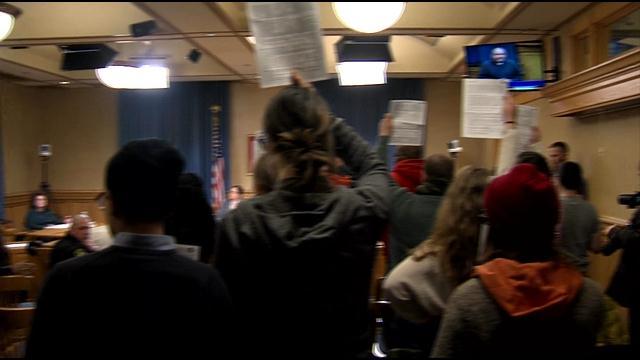 In the first meeting since Milwaukee County DA John Chisholm announced his decision in the Dontre Hamilton case-- signs of solidarity at Milwaukee City Hall.

Members of the Coalition for Justice stood silently holding signs that say \"Do the Right Thing.\"  They urged members of Milwaukee's Fire and Police Commission to uphold the termination of Christopher Manney-- the officer who shot Dontre Hamilton 14 times before he died at Red Arrow Park on April 30, 2014.

\"He had more complaints, than years on the force,\" said Curtis Sails, with the Coalition for Justice.

They also want to have a separate meeting with members of the Fire and Police Commission.

\"We can't meet with anyone who might be concerned at all with the issue or can jeopardize panel,\" said Sarah Morgan, chairperson for the Fire and Police Commission.

Nate Hamilton says they will keep fighting until justice is served.

\"We will stay here, and we will stay committed until the pain is gone, and that can be a long time from now,\" said Nate.

Morgan says an appeal hearing for Manney is scheduled for the first week of February.